The Nintendo GameCube: An Interesting Legacy 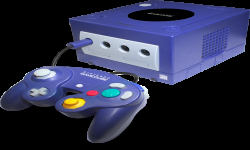 Will The Wii U Have a Similar Fate?

When it originally launched back in 2001, the Nintendo Gamecube didn't perform well. In fact, during the six years that it was on the market, the Gamecube never performed well. It ultimately lost the console generation to Sony and before Wii U, was Nintendo's worst selling home console. But now, 14 years after the ill-fated system launched, Nintendo's lunch box looking system is fondly remembered by both fans and critics alike.

Let's start with innovation. Initially, the system did little to push any boundaries. It brought powerful graphics for its time, and featured four controller ports. It was notably lacking DVD functionality however, which many agree contributed to its poor sales. But today, the console's controller is constantly ranked among the greatest controller designs. The controller was very small, and fit into the hands quite comfortably. The buttons are shaped differently, and molded around their use; for example, the A button is large and bright due to how often it is used. The analog and C sticks are not even on the same plane, something that Microsoft would adopt with all of its Xbox controllers. The controller is so popular that Nintendo even brought it back for Super Smash Bros. for Wii U, albeit in a frustratingly limited form. The Gamecube also featured the first wireless controller for a major home console, the Wavebird. It was considered innovative, and is a practice that has become the industry norm.

Games. That's always the best part of Nintendo, right? Well with the Gamecube, it applies even more. The Gamecube features many classics that are among some of the greatest games ever made. First party titles like Super Mario Sunshine, Luigi's Mansion, The Legend of Zelda: The Wind Waker and Metroid Prime, along with third party titles like Resident Evil and Metal Gear Solid: The Twin Snakes. The Gamecube is home to many critically acclaimed titles, many of which are both highly sought after and timeless.

So, despite being a low point for Nintendo, in terms of sales, the Gamecube is arguably one of their best offerings. The question can be raised. Will, in 10 or so years, the WIi U be at a similar status? Will the Wii U be remembered for it's subtle innovation and high quality games? I certainly believe so. How do you feel? Do you have fond memories of the Gamecube, or maybe you still play it? Do you believe that the Wii U will be popular after its time? Discuss in the comments below.

I not only own a Gamecube, but also still play Gamecube titles on my Wii. It stands as one of the most underrated consoles of all time in my opinion.

I don't own a Wii U... yet. I'd like to see it attain a status similar to Gamecube - but I fear it won't simply because it's failed to gain sufficient third-party titles. That's particularly appalling as there were a number of HD games in the last generation that I felt would have been perfectly suited to a Nintendo console. I'm playing one of them - Majin and the Forsaken Kingdom - on a PS3 that I bought last year instead of a Wii U.

I am a big fan of the GameCube controller, so comfortable!

I don't know if the Wii U will still be popular, but I like playing Wii U because not only can it play new Wii U games, but it can play previous Wii titles, and the Wii is still being played after it was unsupported in 2013, so I don't know... Maybe is all I can say