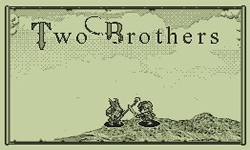 Indie outfit Ackkstudios have announced they are now licensed developers for the Wii U console. They'll be bringing their game Two Brothers onto the eShop sometime during 2013.

Two Brothers started out as a Kickstarter project for PC, Xbox 360 and OSx. The initial goal was to raise $6,000 but this target was smashed and the final funding amount was $16,257 USD.

The game's monochrome graphical style is heavily influenced by the original Game Boy handheld, with large segments of play having a green background and black pixel work. The titular two brothers are called Roy and Bivare, they embark on a quest to prove the existence of a color spectrum - and these color elements begin to feature in the environments.

Personally I never spent a great deal of time with the Game Boy so I'm not going crazy over the visuals, but if you watch the Kickstarter video the game does have some cool ideas going for it.

This thing is mugly if you ask me, I hope they find their market, though.

The idea of going into an afterlife bit when you die is interesting. As for the style, I can take it or leave it.