Disney has announced a new rhythm game called Ultimate Band, a seemingly obvious attempt to cash in on the success of games like Guitar Hero.

In development by Fall Line Studios, senior producer Tim Huntsman feels Ultimate Band will be more fun than the other musical franchises that have come before it:

"Aside from the peripheral, we've always considered those to be more of a simulation versus a game. Our focus has always been on making a game, focusing on the fun and the physicality of what it's like to try to play air guitar". 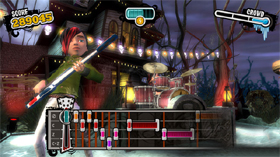 Peripherals will be absent in Ultimate Band though, you'll play along using only the Wiimote and Nunchuk. Details on the tracks are limited, only a few are currently known: 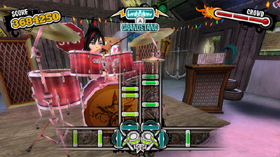 Ultimate Band is scheduled for release sometime during the fourth quarter of 2008.

I don't get how it will use only the nunchuck and wiimote.

Ew a Gh3 rip off, not looking forward to it.

Slayers full album would be awesome.

Even though steady as she goes is a good song because jack white is awesome, I think this game will suck pretty bad. Especially because you have to use the wiimote and nunchuk.

It's a rip-off of Rock Band.

OH YEAH BABY, now I can rock out to my favorite Radio Disney songs.

Oh no not Disney nooooooo! That's the only company worse than THQ.

I really dislike Guitar Hero games, so I'm sure I'll dislike this.

How can you go so wrong, at a concept that is so right?! Please scratch this game Disney.

Why do we need this when we have Guitar Hero?

I'm going to find every person in the development of these god-awful, horribly revolting, sins of life games and kill them all via means of a rusty knife and/or a CD of one of their games.

Without a guitar peripheral, this will be a huge flop. HUGE flop. Sorry Disney, you missed the point of Guitar Hero and Rock Band's success ENTIRELY. No one wants to play this kind of game without some kind of real guitar action/ simulation. We already have the game you propose here, on Rayman 2. This mini-game crap is starting to suck.

It looks like it will be complicated because they don't have a guitar controller and they are making the notes scroll differently from Guitar Hero. They're trying to copy the GH series without copying it fully. This is really bad gaming. Not feeling the rock.

Why all the negativity? Surely more competition in the rhythm game genre is good? I think the decision not to include a controller is a good one, as it will be priced the same as a normal game. Should be interesting to see how it turns out.