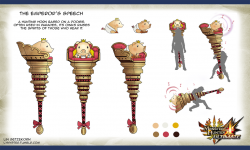 The winner of the Monster Hunter 4 Ultimate Weapon Design Contest in Europe was announced two days ago by Capcom, via their promotional YouTube channel here.

The winner's name is Lin Setzikorn, and the weapon will be a hunting horn titled Emperor's Speech, and depicts Poogie, the recurring pet found in every Monster Hunter title to date, atop a golden throne, clad in his famous "The Naked Emperor" outfit. Capcom announced that the winner of the American Weapon Design Contest will be announced in the coming weeks.

Monster Hunter 4 Ultimate was confirmed for a 2015 release back in January.