Wii U gets microwaved 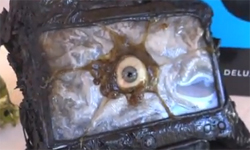 It's safe to say YouTube user dOvetastic has a thing for microwaves. Claiming to be the first, and longest-running 'microwaving entertainment show', not many gadgets escape his fateful radiation.

Recent victims include an iPhone 5 and an iPad Mini, but newest of all is the Wii U console. A deluxe model at that.

Whether it's artistry or insanity is up to you (it might even be both), but the results can be seen below:

As the disclaimer says - don't try any of the above at home (or outside). If you're tempted, at least give Little Inferno a try first.

What a waste. Why not give it to charity?

This guy does wacky stuff that pisses people off, but he's got a lot of subscribers from it.

some people have too much money on their hands.