Using the Wiimote in Brawl

If you've been wondering how the Wiimote controls work in Super Smash Bros Brawl, here it is: 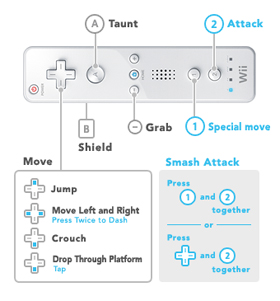 The control pad is used much as you'd expect, controlling movements like running, jumping, crouching and getting down through platforms. 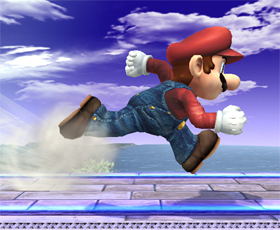 The 2 button is mainly used for standard and strong attacks. Just pressing it alone will do a standard attack, while if you hold a direction you get a strong attack. You can also use it for smash attacks when available. 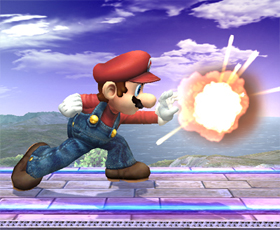 I am the god of hell fire.

The 1 button gets used for special moves, which move depends on the direction you're holding. 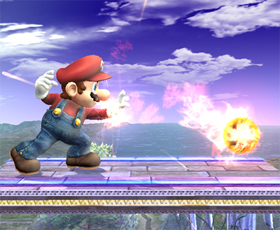 B button is your shield amongst other things. The position of this seems a little strange, but it's accessible enough and could work out ok. 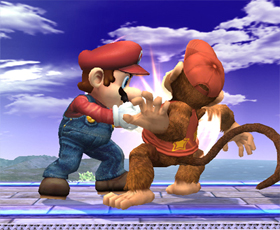 The A button is used for taunting your opponents.

When a smash ball appears you have to hit it, rather than just walk into it. 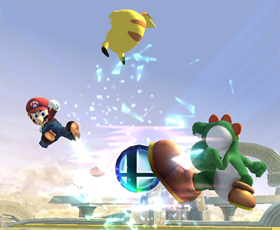 A limited demo of Brawl will be playable in Los Angeles at the "E For All" expo on October 18th (tomorrow). Wiimote controls will be on-hand to try for those attending.

Hopefully this control can be customized. Having Grab mapped to A and Taunt mapped to - would make a lot more sense to me.

That's some serious elephantitis there!

Only thing interesting here is that they did the right thing and put a shield around the Smash Ball, I was wondering if it was going to be as easy as just touching it.

I wish I could go.

Poor Yoshi. I don't think I'm going to play with just the Wiimote, that D-pad's just too small and a control stick is much more convenient. Also: Wii's World, try to get some videos of Smash gameplay. I'm really anxious to see some real-life Brawl action, and I'm sure everybody else is too. Thanks.

The first how to play mode that I ever cared about. Now I'm ready for brawl until February 10th.

Yeah, seems okay. Don't know if I'll be using this way, but I'll give it a try.

At least we know how to use it. I still want to see the Wiimote + Nunchuck action before E for All.

From what I've heard from the guy who translates the dojo, it sounds like you can FULLY customize your controls. So you could make any button you want be jump and stuff like that. Sounds like GREAT news! Also there's going to be three taunts which is sexy.

I wonder if you can bring your gamecube controller. Not that's it's important because I don't live in los angeles.

Wouldn't people be able to steal the wiimotes at E for All?

I hope they allow you to customize the buttons to the way you want because I think it would make more sense if A was used for jump and + was for taunt. It'd also be nice if you could grab items by holding the down button and pressing 2 or something.

How unimaginative. With a motion-based console, they couldn't figure out a way to make an action game more action based?

This is a way better control scheme than I thought it would be. Maybe I won't need to buy gamecube controllers.

I like it better using the wiimote and the nunchuk. I don't like using the remote sideways.

Y'know E for All is expensive. 75 bucks for one ticket on the weekend! 50 bucks for a weekday ticket. Ouch! I can't go.

Makes sense, except for taunt and grab. People will probably get used to it though.

This is too confusing for me. I'll stick with the GameCube controller.

I'm sticking with the gamecube remote.

I don't really mind the change from the gamecube to the wii-mote, this game is going to be awesome.