A press release from Nintendo shows off details of a cool upcoming bundle available with The Legend of Zelda: Skyward Sword. Priced at $69.99 the limited edition bundle will feature a golden Wii controller and an audio CD with tracks from the game. 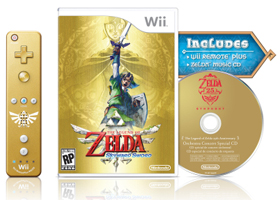 This shiny spectacle will be released on November 20th, 2011 (barring delays of course). The music CD also ships with regular copies of the game that are in the initial production.