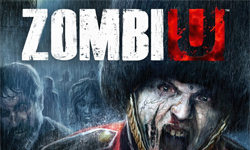 Upcoming Wii U action-horror title ZombiU made its debut appearance at PAX recently, Ubisoft has now gone ahead and released game footage onto the Internet. This video is a little on the gory side with zombie heads getting stomped and beaten with cricket bats, so if you're young or squeamish don't press play! Not that I can stop you.

This footage takes place inside Buckingham Palace, London, and shows off one or two interesting ideas of how the Wii U GamePad will be used during play.

Looks pretty intense, gonna keep this one on my radar and see how it turns out.

I hope it's not all gloomy like this, creeping around in the dark gets irritating after a while.

Got to say, Ubisoft always hits the ground running when a new console comes out. Don't think this one is for me, though.