A challenging, but scary good time.

Nintendo and Capcom re-released this beast of a game in May. Now that Halloween is around the corner, it seems fitting to play a game centered around a man who fights monsters, demons, and various form of the undead in hopes of saving his sweetheart who is sadly stolen away by a devil in the game's introduction scene.

In Super Ghouls N Ghosts, you play the role of Arthur. Arthur is a sturdy man in knight's armor who wields daggers, lances, torches, hand axes, and many other weapons. However, he can only wield one weapon at a time. Collect one and the other disappears. In addition, his armor can be upgraded two times, at which point his weapons take on more powerful, magical properties. His ultimate form allows him to charge and unleash a screen-space-stealing magical attack on his enemies. One hit though, and Arthur's armor falls off. You're then left to fend off a forest full of baddies in your underpants until you die or find another suit of armor. This will happen to you many times. 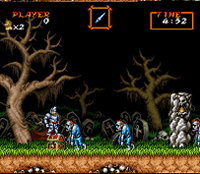 The most notable aspect about this game, aside from its Halloween theme and clever but frustrating upgrade system, is the difficulty. This game, and its predecessors, are extremely difficult. This game is harder than Ninja Gaiden, both the 'new' ones and the original iterations on arcade and NES. It's just that difficult. You will die over and over again, repeatedly, and only the toughest gamers will beat this game. Once you beat the final boss, you have to all the way through the game again and make sure to collect the magic bracelet at the beginning of your second play through. Yes, you actually have to beat the game twice. You will also have to learn which items to have in which stage as having the right weapon, as well as quick reflexes, will determine whether or not you survive.

That said, it's a quality game. The graphics are sharp and colorful. The music is awesome - catchy and creepy at the same time. The controls, while awkward at first, are well implemented. The double jump feature adds another layer of strategy to stages and boss fights. The bosses and enemies are extremely varied, from tiny little demons to giant worm-monsters. One of the stages even takes place inside the body of a giant beast. The terrain will not get old, as you will trek through graveyards, forests, snow-filled caverns, and deserted towns.

I would also like to mention that the game even has a sense of humor. I said earlier that if you lose your armor, you have to fight in your boxers. In addition, there are times that you will be hit by magic attacks, and instead of immediately dying, you will be turned into a little girl or a baby, at which point you can dodge enemies and try to survive until you return to your original form.

But let's face the real reason people play this game: challenge. If you enjoy having to work very hard to keep your lives from fading, then you will love this game. For some, it may be too much. So, if you really, really enjoy high difficulty, give this game a try. It was released when Capcom were at their peak in making quality games. As in games like Mega Man X and their licensed Disney games, the quality and innovation remain consistent here. It's worth a shot for those who have that extra gaming grit. For eight bucks, it's not a bad deal, and perfect for this time of year.