Published by Square Enix, Developed by -

Released way back in 1995 and developed by a now separated 'dream team' of Japanese talent, Chrono Trigger to this day remains a beloved Squaresoft game. One might worry that the game would feel dated, being sixteen years old, but Chrono Trigger is one of the very few special games that actually stands the test of time.

The story in Chrono Trigger starts simple, but quickly grows in complexity and depth. Three youths from a fantasy type world, Chrono, Marle and Lucca find themselves sent through a portal four hundred years in the past. After making it home, the three discover more rips in time. Though initially these time gates are just a curious novelty for the three, an apocalyptic glimpse of the future makes time travel necessary for them to save the world against an alien threat known as Lavos. The player gains several allies through various periods of time, with a robot from the future, a literal frog prince and a prehistoric cave woman proving to be invaluable in the quest to fight Lavos. There are more than a few interesting twists, but the game's pacing suffers slightly near the end and the main story is actually somewhat short compared to say Final Fantasy 6. 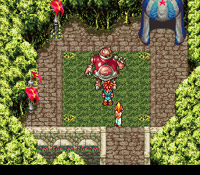 Admittedly, Chrono Trigger's story in general is very well told and it is very impressive that the game manages to tell stories across different time periods. The only real criticism that can be said of it is that the game lacks character development and specific people and places in the game world take a backseat to the stories of various time periods. In hindsight though, time travel stories can become incredibly convoluted, and considering the integration of time travel into the gameplay itself, this flaw can be forgiven.

Chrono Trigger's gameplay might not be incredibly innovative even for '95, but the way it refined certain JRPG conventions is still special to this day. While players still fight enemies, gain magic spells for specific characters only and are limited to three characters at a time, Chrono Trigger does change these conventions. For one thing, enemies are mostly always visible on screen in the field before engaging them in combat. Though this may seem trivial today, one must understand that in CT's day, random battle were the norm. Other than perhaps the Lunar series, Chrono Trigger was one of the only JRPG's that ditched this convention and it worked to the game's benefit. In addition, while specific characters were cast into specific roles (i.e. Marle is a healer, Ayla the cave woman can't use magic but is an amazing fighter), the player could combine spells and techniques together. Double and Triple combination spells creatively made far more powerful spells than they would be alone, and it gave the game a fair bit of strategy when trying to decide which characters to have in one's party at any given time.

In addition, CT uses the concept of time travel itself very effectively in the story. While most of the time travel is done just by following the story, numerous side quests, gameplay elements and even endings are all gained/accomplished through using time travel. The characters eventually gain a time machine and things not possible before become no problem. Need to restore a forest? Start planting and come back four hundred years later. Want to have the town mayor give back what he stole from you? Go back in the past and influence his ancestor's attitude towards generosity. Want to get the treasure in a box twice? Grab it once in the future and again in the past. Paradox! It is moments like this that make Chrono Trigger so loved. 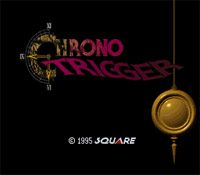 Though the game's graphics are slightly dated, the style and art of the various character sprites hold up far better than many other 16 bit titles. Dragonball creator and Dragon Quest contributor Akira Toriyama's influence can be seen throughout the game's art style, and it actually complement's the game's admittedly now crude graphics. The game is still bright and colorful in almost every area, and each time period has it's own distinct look and architecture, so players won't get confused when traveling through various periods. The graphics hold up quite well, but they aren't likely to win any players raised on 'Modern' games.

Both the music and sound effects in CT are incredible, and the music remains some of the most iconic in gaming. Though some of the music was composed by the legendary Nobuo Uematsu, the true credit goes to the then unknown Yasunori Mitsuda. Though Mitsuda would go on to score the Xenogears and Xenosaga games, as well as the Shadow Hearts series, his work on the Chrono games is arguably his greatest work. Almost every region and time period in the game has a memorable theme that also fits the area very well, and at times makes the Midi soundtrack almost as good as an orchestral score. Equally impressive is the fact that almost every sound effect is distinct and memorable as well.

Though Chrono Trigger's main quest is fairly short compared to titles like Final Fantasy 6 and Secret of Mana at the time, it is upon finishing the game for the first time that its true brilliance shines through. Players are given the option to play through the game again from the very beginning, but this time they start with all of their previous equipment, experience, spells and items from the previous playthrough. Though players do have to play through the same story sections again, this New Game + gives players the option to fight Lavos right from the start leading to more than twelve different endings. In addition, sections or quests that players may have skipped through the first time are available once again.

It must be said however that the Virtual Console version of CT is not the definitive version of the title. This is the Super Nintendo version of the game released back in '95. The Nintendo DS and Playstation 1 versions feature an admittedly better translation job without the extravagant censorship Nintendo enforced on their third parties back in the day as well as some additional content not in the original release. However, the VC version is a better value for only eight dollars and is still well worth your time.

Nearly twenty years after Chrono Trigger's release, the game still stands proudly as one of the finest games Squaresoft or any developer has ever made. It is ironic that for a game so focused on time travel, the game itself will remain timeless.