One of the best Master System games of all time

Depending on the region that you grew up in, the Master System got a bum rap. The Master System essentially had its fate wrapped up for itself by Nintendo's licensing policies in the early days of the 8-bit era, which is a genuine shame, because the Master System had some genre defining and all-around brilliant games.

By the time 1989 had reared its head, the 8-bit war was well and truly over, Nintendo had such a stranglehold on the console market in North America and Japan that it would take the whole of the European continent and Brazil to find any market-share and whilst both Europe and Brazil bought into the Master System big time, Nintendo had around 90% of the video game market by the late 80s. By this time Sega was most definitely broadening its horizons and was already releasing the Sega Genesis into the North American market. 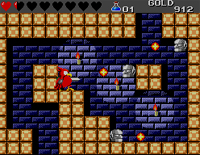 But as said, Sega still had popularity in Europe and Brazil especially, very much akin to the Nintendo in Japan and North America. With this, Wonder Boy III: The Dragon's Trap was released in 1989 to extensive praise and coverage in Europe. What struck a lot of people and even caught them off guard was just mechanically the way the game played. This was unlike a Wonder Boy game on the Master System before it. Here, it was almost a Wonder Boy game, mixed in with the weapon upgrades of Zelda, mixed with the backtracking of Metroid and just a sprinkle of character upgrade ala Final Fantasy. But probably the oddest thing was the feeling that this really wasn't like a Nintendo game at all; in fact, it felt a lot more like an arcade game, similar to a lot of Master System ports, just more intricate and original, which in all honest was something the Master System desperately needed to shove in Nintendo's face: Competition.

Graphically, Wonder Boy is one of the nicest looking games of its generation. Bolstered by the Master System's superior graphical capability, it locks in a fantastically colorful, over-saturated vibe. Just how colorful it is, with the definition in the pixel art is a testament to the work that was put into this game. Wonder Boy's soundtrack checks out pretty great, in fact it is one of the better Master System soundtracks and has a lot of variance level to level, world to world. A great mix of diatonic and chromatic structures, putting the SMS sound chip to work. While a lot of games on the same system were arcade ports and as such, their soundtracks sound like toned-down versions of their former glories, Wonder Boy's original soundtrack leaves for no desiring of a former, better soundtrack, it stands on its own proudly.

However when considering the abundance of games out at the time, Wonder Boy's control stands confident, but not without better competition. By this time Mario and his many clones had shown just how tight control could be, Wonder Boy feels a little slippery in places, a lot like The Lucky Dime Caper, Starring Donald Duck. It seemed like a lot of games on this system shared the same fate, albeit it's only minor and not too noticeable when given time to adjust to the game. 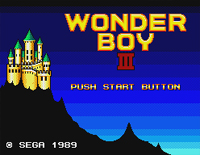 Wonder Boy III's gameplay defines the experience more than anything, mostly because of the radical departure from previous Wonder Boy games. The amount to do in this game is on par with Metroid. I guess it's just strange seeing this game incorporate so many different parts of many different games and still feel like an arcade, side-scrolling game. The inclusion of an upgrading system through weapons brings so much more game-time into the equation. For example, say you want to buy a shield - but for some reason, it won't let you. As it turns out, you need Charm-Points to be able to do that, which means you need to equip yourself with the right armor, the right transformed body and enough charm-stones to be able to progress and get that item. It's a very interesting spin to what would have been a formulaic, unoriginal third game if not for the change ups.

Wonder Boy III: The Dragon's Trap not only proceeds to be the most in-depth (and fun) of the Wonder Boy games for the Master System, it also far exceeds games such as Metroid, Zelda and Final Fantasy in terms of accessibility, whilst still using their formulas and different aspects of different genres, allowing it to cross genres as it pleases. Wonder Boy III: Dragon's Trap is one of the best Master System games of all time.