Mario Party 8 recalled in the UK

Nintendo of Europe has recalled all Mario Party 8 discs in the UK due to problems. The official statement is:

"Unfortunately we have discovered that a small number of games contain the wrong version of the disk due to an assembly error".

However, rumors going around say that it's because the game contains the word "spastic", which is an offensive term in the UK. 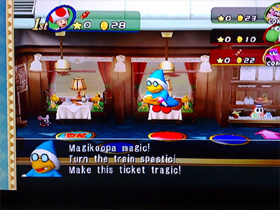 Nintendo hope to relaunch Mario Party 8 in the UK as soon as possible.

I pretty much can only laugh mockingly *mockingly laughing*.

Spastic! By the way it means spaz. Which means retard. Well I think, I don't say it much. He that's pretty funny for me anyway.

What's everyone getting so spastic about? Are they going to have spasms over "spastic"? Makes a guy spastic just thinking about it.

How do you find out what this is about?

Spaz is not retard, it's hyper.

Reminds me of Katie Couric slapping that guy for making her say "Sputem".

Spasmodic behavior is associated with epileptic seizures. At least, that is what I have come to believe. I don't know why they would recall a game over that, so it's probably just a rumor.

Well, it may not mean retard, but that is retarded if it's the case. "Yes, we're announcing a total recall of an awesome party game because one 'offensive' word". Man, Sony fans are just going to eat this up. But whatever, I don't live in the UK. I don't have to hear about it.

I don't think Nintendo would lie about that. But I guess we'll find out.

Isn't that a popular word these days. That happened to another DS game over the same issue.

I have this game. And all I have to say is Ha Ha because it's awesome.

Spastic is actually a term for the disease cerebral palsy which my aunt has. It affects you physically and makes it difficult to walk or talk. It does not mean retard.

Ha well now I'll fly to UK and be like "I have MP8 and you don't you bloody blokes".

Spaz is definitely an offensive term in the UK.

Buying a ps3 is a spastic thing to do.

I myself am one of these so called "spastics" and I find this discussion deeply offensive. I would never buy a ps3.

I didn't like mario party 8. It wasn't as good as the other ones.

Lol smash fan x and "bloody blokes". We don't all talk like that over here, what what tally ho.

They said a FEW games had it, not EVERY freakin game in the UK! Sometimes I think all of these countries are way to serious about video game content. You'll find people banning these games for the most "spastic" reasons.

Okay, it kind of is an offensive word, but hey, some people have been waiting ages for this to come out and when it does it gets recalled, that's pretty shady. By the way smash fan x "bloody blokes". Just WHIT.

Next you'll be telling me that they renamed "The Spastics Society" "SCOPE". Oh no hang on they did that already.

A spastic is someone with cerebral palsy, hence the spastics society. I would like the know the context in which 'spastic' was used in the game but most likely it would still be offensive to actual spastics. Don't they have spastics in the US?

Buy the last mario party game. It could stop at 9, 10, 16, so much they had to make up a new number. Mario sure is a party animal. I'll probably stop at 10, then tell you. I bet 10 has all the mario party minigames in one.