SPIKEY WALLS uses the state-of-the-art precision of the Wii U GamePad's physical buttons versus the lag of a mobile device's touch screen.

You will enjoy hours of fun trying to score the highest and brag on Miiverse when you're finished each session. To make it easier to keep track of your highest attempt, RCMADIAX developed an in-house, state-of-the-art, HIGHSCORE tracker you can see right on the title screen. WOW!

Many of the medium's biggest names have inspired their fair share of copycats. Flappy Bird, from which Spikey Walls 'borrows' its inspiration, is a recent example of this. When Flappy Bird entered the public eye at the beginning of this year, it inspired waves of clones on...read full review 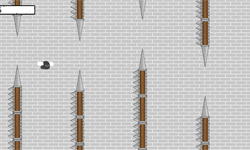 RCMADIAX bringing Flappy Bird style game to Wii U
Many people are familiar with Flappy Bird by this point, the addictive game on mobile phones that proved a runaway success for its creator...