Stealth Inc 2 is a stealth-focused puzzle platform game from the makers of Fluidity and Hydroventure, designed to test both your brain-box and your reflexes as you explore a high-tech and sinister cloning facility in search of fellow clones to rescue. Stealth Inc 2 rewards exploration and experimentation, with death ? and rebirth ? never more than a few moments away. There's no loading screens and no lives to worry about, and no complicated mechanics ? if you can be seen, you're probably already dead.

When Curve Studios created their first entry in the Stealth series, it was a Windows release under the name of Stealth Bastard Deluxe: Tactical Espionage Arsehole. The game was eventually re-released on the PS3 and Vita under the more family-friendly name Stealth Inc: A Clone In...read full review 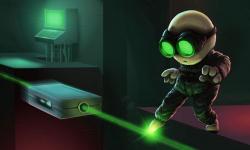 New Stealth Inc. 2 Details
Back in May, Nintendo announced that Stealth Inc.2 would be released as a Wii U exclusive. Since then, we haven't gotten any further...