Published by EnjoyUp, Developed by -

Unepic is a mixture of a platform game, role-playing game and a joke that takes place in a huge castle of medieval fantasy. It is set in the 80s style, but furnished with modern day features.

In the castle, he will be possessed by a shadow, however this shadow cannot control him (being able only talk). The only way of the shadow to escape from the Hero's body is by the death of the Hero, so the shadow will lie all the time giving false clues always looking for the Daniel?s death.

In the castle he will visit an oracle and find out what the goal of the story is: to kill Harnakon, the master of the castle, and free Pure-Spirits. This story sounds typical for a role game, but during the adventure Daniel will discover that everything is not what it seems.

In short, Unepic is a hardcore action-RPG with a rather steep learning curve and a big payoff. There are many games that one could compare it to: cult gem "Legacy of The Wizard", the more recent La Mulana, the classic PC title "Diablo", and to a degree classics like Metroid and...read full review 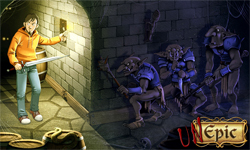 Unepic updated on Wii U
EnjoyUp, publishers of Unepic on the Wii U eShop, have announced a substantial update for their game. The update is available in...

Unepic coming to Wii U
Publishers EnjoyUp have sent out a press release saying that Unepic - a platforming, role-playing type game is coming to Wii U. The game...