Published by Moving Player, Developed by -

Will leave you wanting

I'll admit, when I grabbed Evofish from the eShop, I was excited. I remember playing a game in my elementary school's computer lab that involved creating a fish and trying to survive in the Great Barrier Reef with it, earning points to "evolve" your fish, making it faster, bigger, or even giving it poisonous barbs or ink sacs to escape predators. Naturally, as I was waiting for Evofish to download, I was expecting that game from my early childhood, and once I finally played the game, I found it to be very similar, albeit with a different, and more simplistic, set of game mechanics involved.

Evofish throws you into the game as a tadpole-looking creature, and it is your goal to eat all of the fish smaller than you, while fleeing from the fish that are bigger than you. The first time that you play, with each evolution (there are twelve that you must complete to unlock the next fish to play as) a new power-up is revealed for you to use, with a total of nine power-ups to choose from. The catch is that these power-ups are expendable, and in order to attain more, you must either find and pick them up while playing (at which point they are used immediately), or buy them in the EvoShop, once you realize it is there. 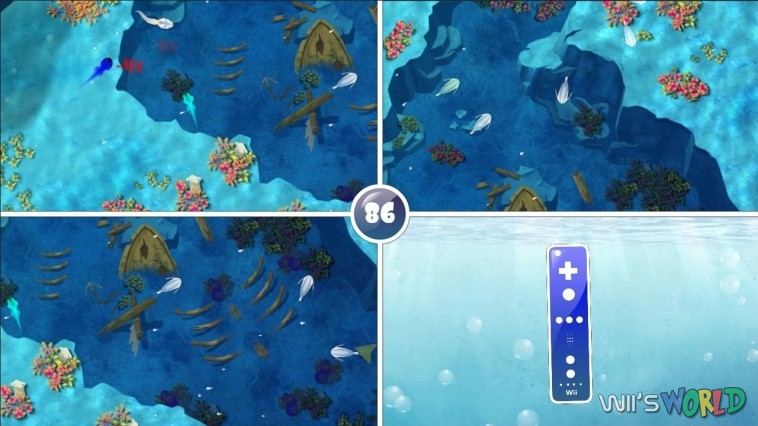 The gameplay is as simple as moving around an enclosed environment with the left analog stick, and this works fluidly. The trouble comes when trying to pick a power-up to use from your inventory, which is located on the game pad's touch screen; having to look down to remember where your health power-up is when you're cornered in the game could spell the end for you. The developers must have realized this, however, as they added the ability to hot-key a power up each to ZL and ZR, but this still requires focusing on the GamePad's screen while trying to survive on your TV, making the power-ups rather risky to use.

There are three multiplayer modes, as well, which might be fun at parties, if your friends are interested enough to try the game (mine weren't, so my experience with this mode is limited). The first mode is 1 vs. 4, in which up to four players with Wii-motes take on the player with the GamePad; the GamePad player must eat smaller fish to grow, while the other four players grow over time simply by not being eaten by the first player. The second game mode is last fish standing [standing?? -ed], in which all players follow the same rules as single player, except that if a player dies, then they are out. The third mode is called God of Swarm. This mode flips 1 vs. 4 on its head, in that the player with the GamePad controls all of the bigger fish to try to take out the players before they can evolve.

At the very least, the graphics of Evofish are entertaining, and the ripple-effect of the water is crisp and well done. The music is not bad, but sounds a lot like music you would hear on the Weather Channel. Honestly, aside from what I've already stated, the only other thing that this game suffers from is a distinct lack of content; The map is always the same, the music is always the same, the enemies are always the same... If they added more variety in any of these categories, then I would be much more likely to come back to it.