Jett Tailfin has an interesting premise, being that it's a racing game with an aquatic setting. Operating on the premise alone, the game has a lot of potential. Before playing and just looking at a few screenshots, I pictured the game being a mix of a lesser-quality Mario Kart mixed with Finding Nemo's or The Little Mermaid's colorful visuals.

I was hoping that my prediction was true, but it's not. To be fair, the game shouldn't be expected to stand up to Nintendo's kart-racing titan. Still, it doesn't live up to its own price tag either. At the time of this writing, it is selling for 40 dollars in physical form at Best Buy in the United States. That's way too much to ask for this game and it shouldn't take me long to explain to you why. 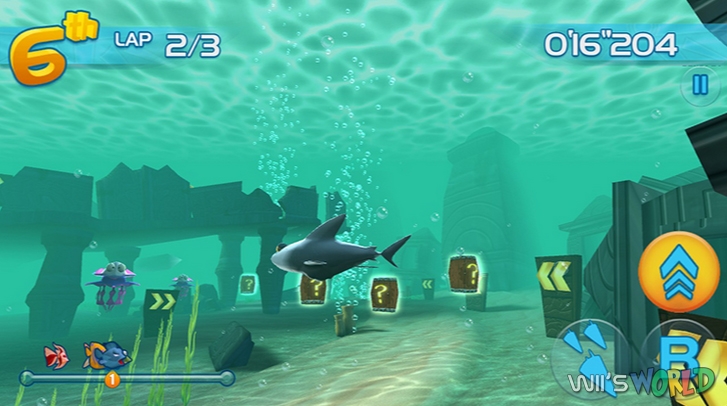 Before letting this one swim away without a little praise, there are a few positives to mention. Like most kart racers, there is a good variety of characters. Jett Tailfin, the game's protagonist, has a lot of fishy buddies with varying stats. The designers apparently attempted to give each character a unique personality - There's the nerd, the jock, the cute girl-next-door type - the Breakfast Club is all here.

Jett Tailfin has an interesting surf musical style that might remind a few ears of Dick Dale and early B-52's. The music fits right in with the setting. The visual style has potential as well - it's extremely colorful with flora and fauna everywhere. Unfortunately, it lacks polish. With a low polygonal count and a very choppy frame rate, you may find yourself wishing this game spent more time in the developer room. If this were a budget game, it would be beyond passable, but it's not.

One more positive I will mention are the cut-scenes in story mode: They are done well, and whoever made them deserves credit. The attempt at humor is well done and poor Jett Tailfin and his friends are likable characters. Not only do the cut-scenes advance the story, but they explain elements of gameplay that are critical to winning - this is very cool. 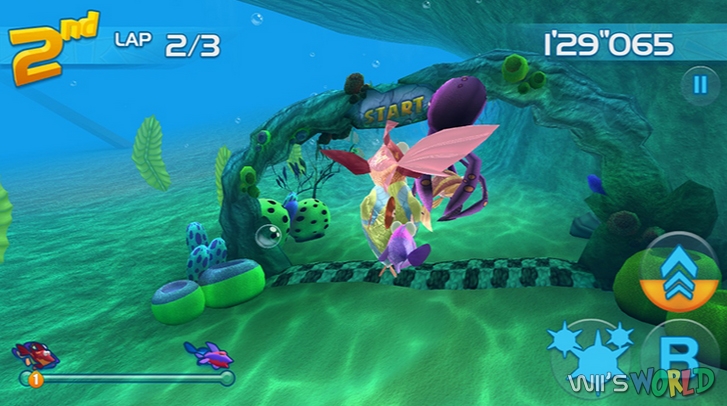 The game also features difficulty settings and other options that allow you to customize the experience more to your liking. That is a plus for nearly any game, and there is also a quick-race mode for those who don't want to sit through the cut-scenes in story mode.

Now on to the negatives: The main failing point of Jett Tailfin is simply in the gameplay itself. If the Mario Kart series' rubber band A.I. gets on your nerves, then you better brace yourself. It is very difficult to stay ahead of the pack, no matter how hard you try. Like other kart-style racers, you have multiple offensive and defensive weapons at your disposal, but you will find yourself on the receiving end of them far too often - especially if you come out in first place. Not only do you get hit every few seconds, but when you do, your characters almost halts to a complete stop.

Although the tracks/levels are varied in visual style and setting, they eventually start to all feel the same. On top of that, the controls are quite awkward. The placement of the dash and evade buttons will make even large-handed individuals move their hands from one side of the GamePad to another. Mix the frustrating rubber band A.I. with the aforementioned choppy frame-rate and frustrating controls, one will likely put this game down quickly, despite the catchy soundtrack and cute characters. 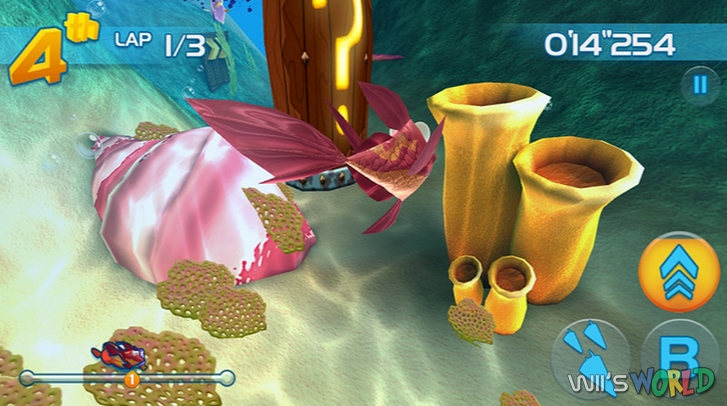 Jett Tailfin was originally a 99 cent Android phone title, and if you have played a few smartphone games, it isn't hard to see this. When porting this game to Wii U, the developers added new features and refinements. Despite these changes, I think that they should've made a whole new title that could really shine on the Wii U console. Jett Tailfin simply doesn't. It's hard to slam this game, it could've been really good, but the asking price is far too much for such a title.

If you're simply looking for a good cartoon-style racer that isn't Mario Kart, Sonic & All-Stars Racing Transformed is selling for 15 dollars brand new. It's an excellent alternative to Nintendo's flagship racer and you will have spare change to boot. If you're looking for a nautical adventure of some type, I would highly recommend Ecco the Dolphin on Sega Genesis, Finding Nemo on GameCube or PS2, or the breath-taking Endless Ocean on Wii. Pass.