Sonic & All-Stars Racing Transformed is changing the rules with a new thrilling racing experience featuring Sonic the Hedgehog and a fantastic cast of SEGA All-Stars competing across land, sea and air in vehicles that fully transform from cars, to boats, to planes.

Following on from the huge success of Sonic & SEGA All-Star's Racing, the characters now have their own unique transforming vehicles designed to take advantage of the varying terrain. The line-up on the Sonic & All-Stars Racing Transformed grid sees SEGA favorites ? including Sonic the Hedgehog, Dr Eggman and AiAi ? return to battle against newcomers that include Gilius Thunderhead of Golden Axe and Vyse of Skies of Arcadia.

When it comes to lighthearted racers, the Mario Kart series has been our champion for over twenty years now. Pretenders to the throne have come and gone (anybody remember Wacky Wheels by the way? Good times). The latest would-be usurper is Sonic & All-Stars Racing Transformed, a...read full review 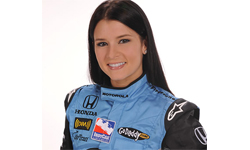 Theres also the 3DS version that I'd be willing to review.