It's funny how a premise that sounds so monotonous and boring can turn out to be such an entertaining experience. Constantly mining for hours upon hours doesn't really scream "exciting", and nobody would really expect this type of game to take off. Then comes along Minecraft, a game that places its focus almost entirely on mining, and it wowed gamers all across the globe with how fun it surprisingly was. Now here comes a small little indie-game by the name of SteamWorld Dig, finally arriving onto the Wii U eShop. SteamWorld Dig here also places a heavy focus on mining, but can it manage to make mining fun like Minecraft managed to do for so many people?

You take the role of Rusty, a cowboy robot who travels to the town of Tumbleton in order to explore the underground mine that his late uncle Joe left for him. However, as Rusty continues to explore the depths of his uncle's mine, it becomes apparent that there's something increasingly wrong with with it. It's up to Rusty to find out what the issue is and gather enough resources to keep the small town of Tumbleton going. 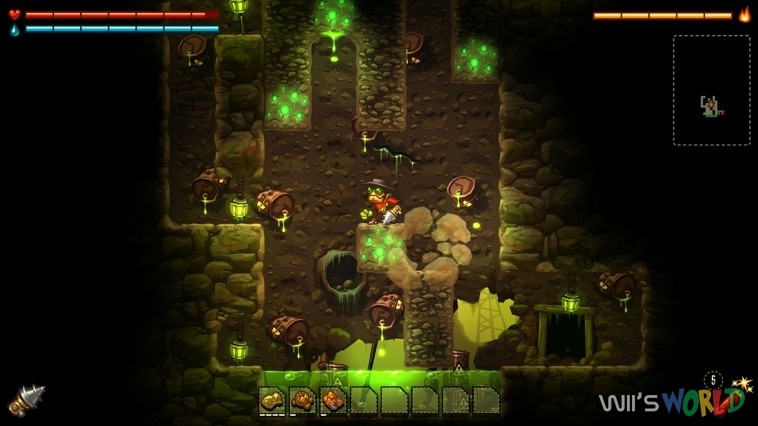 SteamWorld Dig is a 2D platforming game where you mine, kill monsters, and mine some more. There are several minerals you can mine up, and each one is worth a certain amount of money. You can use the money you get from what you mined to upgrade Rusty and help Tumbleton grow. Not only that, but you can also find various tools down in the mines that Rusty can use to help traverse through the mines more easily. The more you progress through the mines, the better minerals you'll get and the stronger the enemies will get.

There are three main sections to Rusty's mine, each section has three "levels" that you enter by going through certain caves you will find. At the end of each level awaits a new object that Rusty can use, and not only do these greatly help you explore much more easily, they also keep the game fresh and interesting. These items range from boots that give you resistance from fall damage to a drill that allows you to burrow your way through the mines quicker than you would with a normal pickaxe. Several of these objects require water in order to operate, however, so you'll need to keep your water gauge under close watch.

SteamWorld Dig thankfully controls like a dream. Mining is as easy as holding down a button, and Rusty will quickly respond to your inputs at all times. It was a bit jarring at first with some of the button mapping choices, like having B being the jump button as opposed to the typical A button mapping for jumping, but they're easy to get used to once you work with them a little bit. You can customize some of the button layout choices if you so choose, but it's limited to only a few actions. 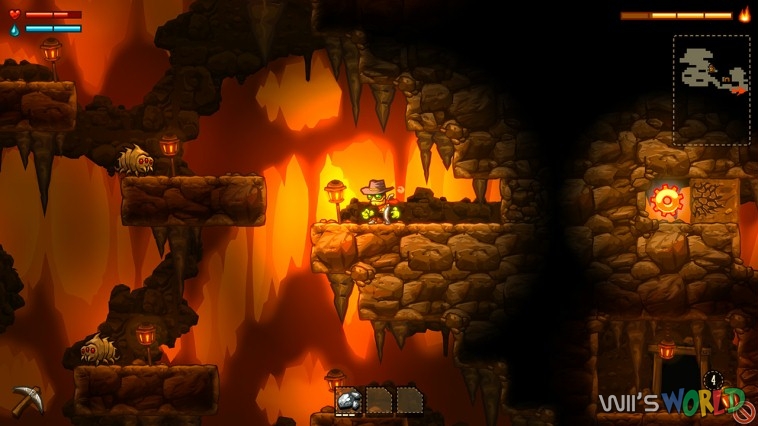 Visually, the game looks great. The colors and animations are all very nice to look at, and there's not a single moment in the game that looks atrocious. The soundtrack is obviously Western-themed, and it does great with setting up the atmosphere of the game both above and underground. Some might get sick of seeing dirt all over the place, but then again, what do you expect from a game about mining?

The only major flaw with SteamWorld Dig is that it doesn't last very long, and there's very little to keep you coming back for more. The campaign can be completed in 3-4 hours, and you are offered absolutely nothing to do aside from the story mode. This really hurts the overall value of the game, but because SteamWorld Dig is so good, it's something that can be forgiven. Sort of.

While the combat in the game is effective, it could have done with a bit more variety. Most enemies require nothing more than just going up and holding the A button next to them in order for them to die. Even with the different tools in the game, this can get a bit repetitive, but because enemy encounters usually don't last that long anyway, it's not a huge issue.

SteamWorld Dig is an incredible indie game that I urge any gamer to give a shot. If you've already played it before on another console, there's nothing in the Wii U version that will convince you to buy it again. For Wii U owners who have yet to experience this game, do so as soon as you can. You won't regret it.

Great review. I'm looking forward to getting this, the longevity doesn't worry me too much.