Published by keen, Developed by -

After reviewing the excellent Mario Kart 8 I decided to take on another racing game less well known. I have to admit, the name of the game didn't get me all excited and itching to play.

However, the saying I normally go by is "don't judge a book by its cover" so alright then, let's do this. TNT Racers - Nitro Machines Edition is a racing game that seems familiar, but it differs quite a lot from other racers. You're looking down from a bird's eye view on cars that look like Micro Machines or Hot Wheels, anything along those lines. Take those cars, and give them wonderful item boxes from Mario Kart and then add a bit of Death Race in there and that is what it is. 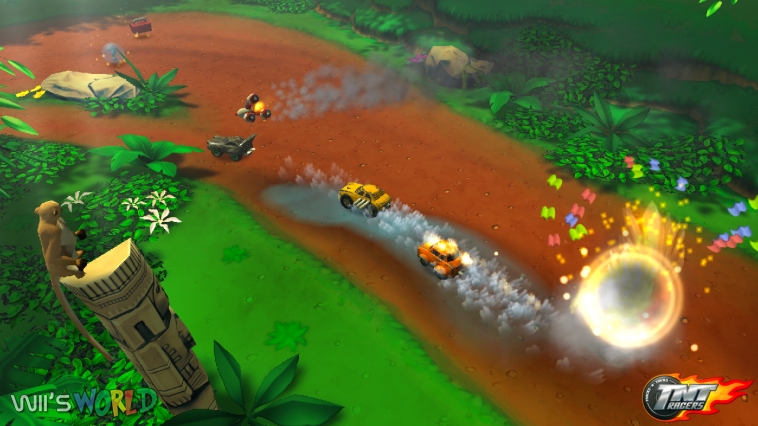 The main menu gives you a few options to choose from, the main one here I will talk about is the Single Player option. It gives you different categories of challenges and tournaments that are there ready to be completed. Some of these include racing, time trials, knockout races, coin collecting and item smashing. The normal challenges all give you a nice feel so you can get used to the controls.

You press A to go, and let go of it to neatly drift around corners with the analog stick, R to shoot a weapon and L to get rid of the weapon. The controls take a little getting used to, but the stages are very well set out so you can afford to screw up a few times. You have to drive to keep in track with the camera.

If you fall behind the other racers then you are going to either get destroyed or come back as a ghost (shadow mode) to stop the surviving racers, either way you are out, but you're having fun at the same time. However the difficulty will go up quite fast, so you're gonna have to learn quickly. Whilst mastering the controls you will have to learn how to use the weapons that come in the item boxes. 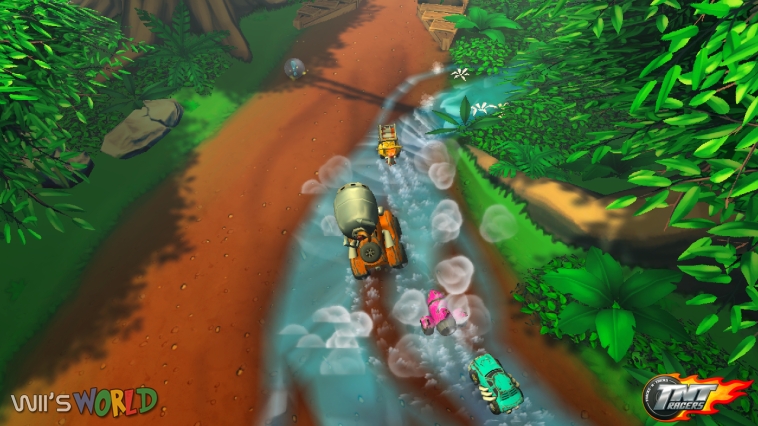 The items are quite delightful, only with a few exceptions. When you're racing against the CPU some of these items don't even have that much of an effect on them, most notably the steam creating item and the one that mirrors the map in an instant motion. When the item that mirrors the map is used I get really thrown off, even though I have played this game enough. The CPU seem to casually avoid it, leaving you to be screwed up and out of the round, which seems like an unfair advantage.

Your items are more effective when you're a ghost, they range from whirlwinds to laser beams to wooden mallets. All the items that start off with the ghosts are effective, but when two of the ghost racers come after you armed with lasers they will slow you down and more than likely get you out which can be very annoying.

The visuals on this game are surprisingly nice. The backgrounds are brilliant in my eyes, as there is stuff like birds flying around and ostriches running behind fences, it's great to see and shows the effort they have put in to make the game look glistening. The graphics on the cars aren't as impressive, they aren't terrible but they need polishing up. 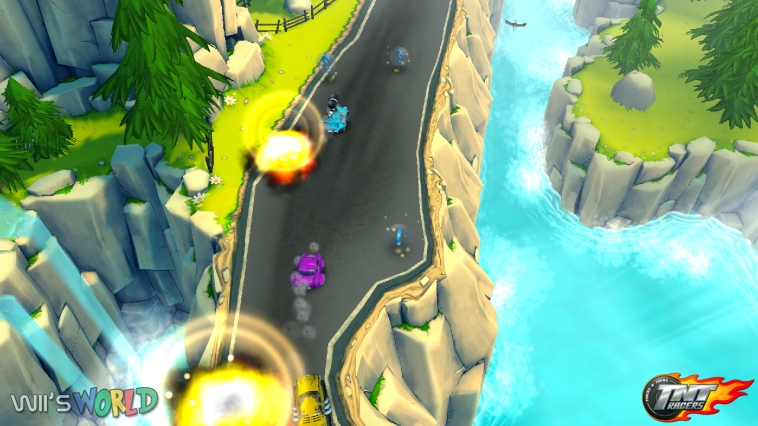 The cars in the selection screen all look like they have facial expressions, and if I am honest it put me off a little bit, but as this is aimed at a younger audience it could be more appealing to them. The weapons have good effect on other cars, especially the oil slick weapon which makes you slide around everywhere.

The music in the game reminds me of something from a Pixar short film. It's quirky and cheesy, it does somehow suit the gameplay in its own unique way. Unfortunately the more I played this game the more the music became tedious, especially if there is a level you can't do and that music just plays over and over. The music isn't too memorable, it's mainly just a pleasant listen when you go through the game. The audio from the weapons are corny and silly sounding, but a few of the sounds are quite lackluster and I believe more sounds could've been used to greater detail. The sounds of the cars are all fine, they're nicely timed to the movements of the vehicles.

Sadly there is one major problem with this game that has dropped its score down, and that's online play. A missed opportunity for a game that would work brilliantly online and can shift a few more copies as when you play against humans it's pretty good. Without online play I don't think the $6.99 price tag is justified as it's just challenges and tournaments. 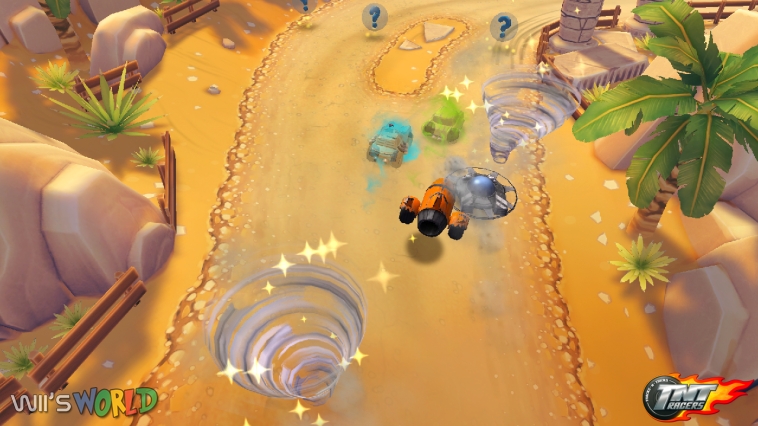 Even though there are great unlockables and items used in this game, the racing system, even though it works fine for me and is unique in its own right, wont be to everyone's taste, as it can get frustrating trying to stay in the camera's view trying to survive.

TNT Racers is worth a play and will be a good use of your time, but replay value lacks heavily as it is only addictive until you've done everything on single player and you have a few multiplayer games every so often. It's a good racing game, but for what it contains the asking price is a little bit too much for my liking.