Stuck in the past.

Konami's Castlevania series is one of the longest running and most beloved franchises to remain from the NES era of gaming. Though the most recent 3D installment Lords of Shadow has had mixed opinions from fans and critics, the 2D entries in the series have largely remained well made. Enter Castlevania: The Adventure Rebirth, a new 2D installment for WiiWare based on a game for the original Game Boy released more than twenty years ago. Though Rebirth's levels are mostly brand new with improved graphics and sound, it unfortunately shows its age with some questionable design decisions.

Once again, players are cast into the role of one of the Belmonts, the premiere vampire slayers not based out of California. Also once again, Dracula has been resurrected and the player's job as Christopher Belmont is to slay the vampire. There's little to no story apart from a small slide show at the game's beginning, so there isn't much to say on that front. 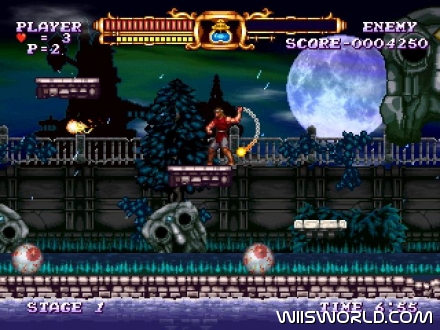 Considering that Rebirth was based on an original Game Boy title, the graphics are a huge step up. However, detail oriented players may notice that some of the level art and enemies are taken directly from earlier series entries like the GBA titles and Symphony of the Night. The pixels on game sprites are also very noticeable and seem to indicate a lack of polish. Still, the game is bright and colorful which is always a plus.

Surprisingly, the sound in Rebirth is among the weakest of the entire 2D series. There are a few great remixes of earlier Castlevania tunes, and a few noteworthy themes like the Stage 5 Clock Tower, but for the most part the original music is forgettable. It isn't terrible by any means, but it could have been better. Sound effects are well made and sound somewhat like something from the current generation, but seem strangely out of place in a game that is supposed to be based on earlier hardware. If the graphics were better, the sounds and music would make more sense, but as they are they don't mix.

If you've ever played one of the Castlevania titles for an 8 or 16 bit console, the gameplay should be instantly familiar. Players walk from left to right, avoiding enemies, killing monsters and trying to make it to the boss (or bosses in certain levels). Players collect hearts for sub-weapon power-ups, upgrade their whip to make it stronger and smash open walls for some questionably fresh meat to gain health. Rebirth also includes a feature taken from Rondo of Blood, namely keys hidden in certain candles. These keys take the place of subweapons, and if the player is diligent in keeping these keys they'll be able to open secret passages and areas. Unfortunately, unlike Rondo of Blood or Castlevania 3, these 'secrets' don't dramatically alter the level designs nor lead to different levels. Sometimes they may give better power-ups or points, but that's about it. 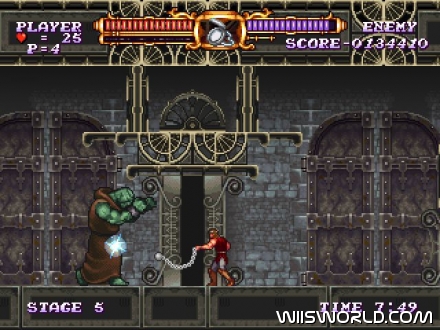 Rebirth is also one of the easiest entries in the entire series. There are only five stages and despite the lack of an eight directional whip (i.e. Super Castlevania 4) or experience points like in the later titles, neither the enemies nor bosses compare to any of the earlier titles, with the possible exception of the super easy final boss in Castlevania 2: Simon's Quest. Perhaps Konami was trying to make the series more user friendly, but there's less of a sense of accomplishment than in previous titles. Despite the game being easier for veterans, Rebirth may in fact be harder for newcomers to the series as there are no continues, nor passwords and the Wii Menu trick doesn't work for this game, so the game must be finished in one sitting. While players can adjust the number of lives in the option menu, not having a way to save your progress is an obvious design oversight.

Overall, Castlevania: The Rebirth feels like Castlevania: Generic Brand. It has all the familiar trappings of a 2D Castlevania, but does nothing truly memorable. Unlike Rondo of Blood, there's little incentive to play through the game more than once and given how short the game is, 1000 Wii points is far too high an asking price. Players are much better off getting one of the NES titles, Super Castlevania IV or the relatively unknown Rondo of Blood. Nostalgia may be comforting, but nostalgia alone cannot carry a game.