The best 16-bit game that never was.

After waiting through all the delays, Cave Story finally hits WiiWare six years after its release on PC. Cave Story is notable for many reasons, not the least of which is that it can be considered as a spiritual successor to Super Metroid, yet in a way is a tribute to nearly every 2-D action game of the 90's. There are elements of Mario, Mega Man and even the sheer insanity of Treasure's titles packed in. After so much waiting and a higher than usual asking price of 1200 Wii points, is the game worth it? 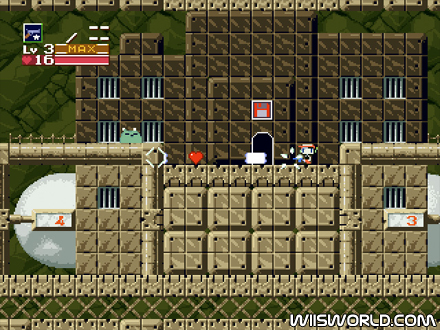 As mentioned earlier, Cave Story plays almost exactly like Super Metroid or any one of the portable Castlevania titles released in the past decade. Players start with little more than a small gun to fight enemies with but eventually gain more weapons and power ups as they progress further into the titular subterranean labyrinth. Platforming is trickier than in Metroid though, and random bottomless pits, instant kill spikes and reappearing enemies evoke memories of the classic Mega Man titles. Interestingly, Cave Story adds an experience mechanic to the standard shooting fare; as enemies are killed, they leave behind experience chips. Gain enough of these with a certain weapon and the weapon becomes stronger, turning even your dinky pea-shooter into a weapon that shoots gobs of hot light. This encourages enemy encounters and actually helps train your reflexes for boss fights.

Speaking of which, Cave Story is proof that there can still be a thing as a fun boss fight in an action game. While initially bosses range from somewhat ridiculous (a giant frog), eventually you fight some truly out of this world enemies, including dragons, witches, robotic tanks and even a demonic god. These bosses will legitimately test your gaming skill, and to your chagrin, you will realize that any loss against these monstrosities is your own fault.

Surprisingly, Cave Story's...err, story contains a good deal of subtext and is quite imaginative, feeling mostly like a macabre fairy tale. Initially the game starts with your character, a recon robot named Quote (likely a joke as Quote is a typical silent game protagonist) with no knowledge whatsoever, as in the dark as the player. Eventually however, the tale of numerous wars, the lust for power and hope in the midst of despair unfolds. What makes Cave Story's narrative so strong however is that Pixel's character designs convey the story better than mere words could have, illustrating the horror of the island cave's weapons and how even the most innocent of creatures can turn into horrible monsters. 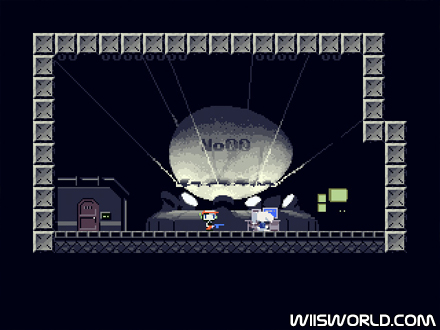 The game's sound effects remind one strongly of the simplistic sounds of the 8 and 16 bit eras, though they don't play a large part in the game. The music however, is phenomenal. Using a combination of Midi and electronica sounds, the music plays a huge role in conveying the mood of the story and environment, and the game wouldn't be the same without it.

What makes Cave Story especially amazing though is that the main game, what is called the 'story mode' in the WiiWare version, was made over five years by just one person. Once again proof that you shouldn't rush games to meet Christmas deadlines and that creativity is its own reward. The game has three distinct endings which can only be earned if players go out of the way to achieve 'optional' objectives. Also be warned that while the game does frequently allow players to swap weapons with other characters, only a player with patience will gain the almighty Spur, the most powerful weapon in the game.

For the most part, the WiiWare edition of the game, modified and ported by a company named Nicalis, doesn't add too much to the overall game experience. A Boss Rush mode which was eventually made a mod for the PC version is included, as is a time attack mode for the sanctuary stage which is the most difficult area in the game, though again, Time Attack is already part of the PC version. WiiWare patrons do get new graphics and music though, as well as three save slots and the option to play through the game as Quote's partner robot Curly Brace. Also for newer players is an Easy Mode, and for those who heard of the legendary feats of playing through the game without extending one's life bar a hard mode is also included. Unfortunately, the updated music as of now has technical problems and playing as Curly is not actually very different at all from playing as Quote. 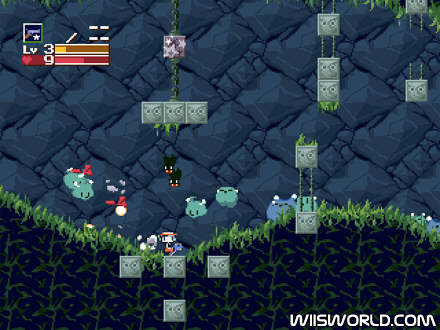 So with that being said, why would you want to buy the WiiWare version if the PC version is free? The most important issue is control. If you're a PC gamer who has a USB gamepad similar to a console controller, than there really ISN'T any point in buying the Wii version. Most people however likely won't have one, and playing Cave Story with a keyboard simply doesn't compare to doing it with a controller. Some might even find the difficult last areas impossible with a keyboard. A twelve dollar game does cost less than a twenty dollar gamepad after all, and it goes towards Pixel, which is always a plus.

If you enjoy 2-D games at all, you'll love Cave Story. It'll remind you of simpler, better times of childhood, if even for a moment and remind you exactly why video games were fun in the first place.

There are no bottomless pits in Cave Story? Spikes, yes, but the only pit in the game that has a bottom you can't see is on the very edge of the island. All the other pits that come to mind have spiked bottoms. Otherwise, I think this review is pretty fine.

Thanks for the great review. I've downloaded the Linux version.

Not that I'm one to throw money away, but even though I played and beat this years ago for the PC, it was totally worth it to know that indirectly it supports Pixel. He's a pretty nice guy from what little I talked to him. You won't be disappointed.

This is a great review of a great game but has anyone seen the woman that programmed it, wow! Beauty and brains. Tiffany Leigh Smith from GameDev Net, she's also an actress, she's English but lives in California, talented lady.

What are you talking about? The programmer of Cave Story is a Japanese man. I believe his name is: Daisuke "Pixel" AMAYA. The female you mentioned was only involved in the WiiWare port.

Under NO CIRCUMSTANCES WHATSOEVER should Pixel's genius be attributed to someone else. Don't insult his mad skillz; I want a sequel!