Published by Nicalis, Developed by Nigoro

We've finally made it to La-Mulana. Let the adventure begin!

Originally meant to be a tribute to the days of the MSX computer game system (which even predated the NES), La-Mulana was a humble Japanese indie game with a lot of heart. Though indie games do not have a large following in Japan, the game slowly gained popularity in the west and led to the development of this remake for WiiWare. Though development has been troubled, La-Mulana has now arrived on both PC and WiiWare and the experience is well worth the wait.

La-Mulana stars Lemeza Kosugi, a third generation Japanese American who is a whip-cracking archaeologist and professor. Wanting to outshine his father, Lemeza quests for the secrets of La-Mulana, a series of ruins said to contain the origins of life itself. The story is more in-depth than most games of this type and is fleshed out by notes and diaries, but in honesty is not that important to the experience. Still, it's nice that the game's developer Nigoro at least tried for a respectable narrative. 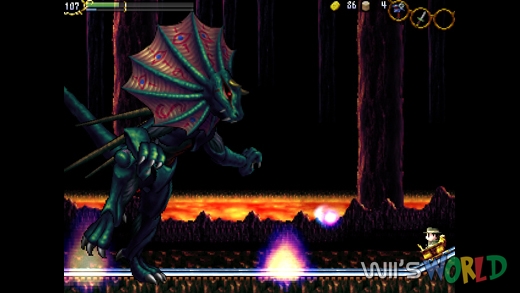 La-Mulana's gameplay can be described as similar to Castlevania, The Legend of Zelda, Metroid and even certain old-school adventure titles. Though players start in the outside, the majority of La-Mulana takes place in a series of interconnected ruins, each with their own unique themes, puzzles, traps and enemies. What makes La-Mulana especially interesting is that unlike Zelda or Metroid, players are free to tackle area bosses at any time if they have the proper keys and can be as overpowered as they like. Most navigation in the game does rely on going through sections of a large map and collecting new items to get through various obstacles and barriers though, and like Nintendo's classics, backtracking is almost a necessity as are items purchased from various shops. In addition, La-Mulana doesn't guide most players towards objectives, making it somewhat non-linear and confusing at the same time. Thankfully, there is a warp point system and most navigation isn't too difficult, but even without its puzzles, La-Mulana is staggeringly large for an indie production.

What sets La-Mulana apart from its more recent exploration based ancestors, (i.e. the 2D Castlevania titles like Symphony of the Night) is a series of puzzles and dangers rooted in 8-bit sensibilities. While initial puzzles only involve putting stone blocks on platforms (ex. Indiana Jones), others may involve whipping a group of blocks in a certain pattern, fake walls, taking a leap of faith into what looks like a bed of spikes, and having entire sections of the level change based on the position of different icons. A fair amount of trial and error is involved in these puzzles, not to mention items that may not be obtained until much later in the game. Likewise, the clues one is given by dead adventurers or notes are almost completely cryptic and unhelpful. It is possible for players to finish the game by themselves, but it's highly recommended to either look at the video for newcomers to the game or check out the La-Mulana wiki.

The game's bosses also have a clear old-school influence. It is necessary to defeat these bosses in order to clear the game, but as mentioned earlier, players do not have to fight many of them until they want to. It's recommended to gain health expanding orbs or more powerful weapons before fighting bosses, as most tend to be really difficult even with these upgrades. Even without the bosses, traps lurk where one might least expect them and many mean instant death. 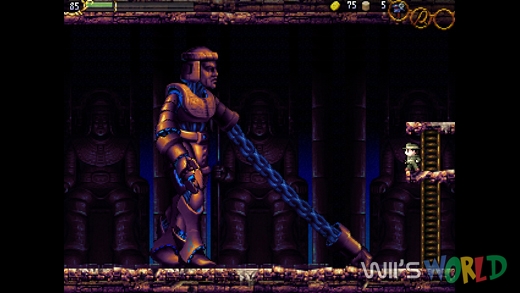 The original version of La-Mulana had graphics that were very similar to NES titles such as the original Castlevania and had impressive sprite art. This remake features similar character sprites, but most of the art is brand new. Admittedly the game's actual physical environments aren't exactly varied, all being a series of ruins, but each area is surprisingly varied in terms of aesthetics and design. While one area might be similar to Mayan ruins, another feels like an Egyptian tomb and each has its own unique color scheme, enemies and obstacles. In many cases, the remake goes above and beyond with its art and seems to take inspiration from the early PlayStation 1 or Sega Saturn 2D days than say those of the SNES or Mega Drive.

La-Mulana's music is spectacular and it can be argued that Nigoro understands what makes great game music, even if older Japanese gaming companies seem to have forgotten. While there are one or two tracks that could be better, most of the music suits the mood of every level it accompanies. The sound effects are also quite good, even if the cracking of Lemeza's whip does get slightly annoying after a while.

As mentioned earlier, La-Mulana is an immense game, and will likely take players at the least ten to fifteen hours to finish. This isn't even including the game's additional Time Attack mode and Hell Temple area, a gauntlet designed for only the very best players and will likely take some time to finish. Those who buy the WiiWare version won't have the Hell Temple DLC, but PC version owners get it included. As La Mulana's WiiWare price is 1,000 Points, a game of this size and polish is easily incredible value.

Though La-Mulana is not without a few things that might make more casual players balk, it also happens to be one of the best 2D titles in years and an amazing tribute to the days of early 80's gaming. It might be tricky at times and players will suffer, but that is part of what marks a truly great adventure.