Spanish developers DreamBox have hit the WiiWare service with a game much more ambitious than the lighweight fare we see week in week out. Robox is an action platformer that has a lot in common with the old Metroid games. You take control of a robotic probe that has crash landed on the surface of some unusual world, to spend the rest of the game recovering your abilities and getting upgrades. As the title suggests, the main character is pretty much a box, albeit with some feeble looking arms and legs.

In terms of learning curve, the makers haven't pulled any punches. In fact they put the boot in right from the start. The levels are full of bugs and beasts with annoying attack patterns, and in honesty your little robot is ill equipped to deal with it all. He/she/it has one simple attack, a laser gun which shoots sideways, and sideways only. This makes for many tense moments when enemies are coming in from all angles. Take three hits and you're heading back to the most recent checkpoint, which are spaced fairly but firmly. 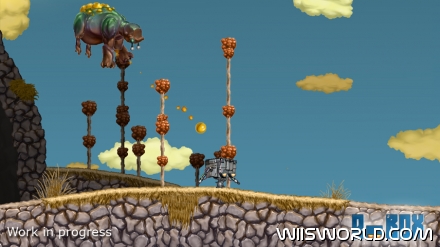 Equally tense is the style of platforming used. If you remember the old days when games were games, landing on the edge of a platform would often see you fall through it. This is the way in Robox. Inevitably it leads to some frustration, but personally I enjoyed this aspect of the challenge. The stop-and-start gameplay requires some patience, playing a section until you master it sufficiently to move onto the next (a'la Mega Man I guess).

On your travels you'll come across amber rocks to collect. Most of these are in hidden or awkward to reach places, but they play an important role. At any point in the game you can hit the - button and view the inside of your robot, where you take control of small creatures. This section is more puzzle-like in nature, with four different types of creature, each having a special ability. Gradually as you get more amber rocks (and subsequently more creatures) you begin repairing damaged circuits and regaining abilities for your robot. Though it's a great idea, this aspect of play could have been implemented better. The creatures move too slowly and moving them to other areas of the robot is much more time consuming than it ought to be.

The platforming action is also broken up by some "light-gun" shooting segments while your robot takes a ride on a giant slug. These aren't very interesting though and feel like they outstay their welcome. 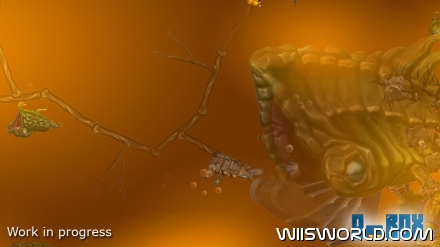 Robox consists of three worlds, each split into a number of levels. All the levels are interconnected in various ways though so you can travel back and forth through the whole game without interruption, which effectively makes the game world very large and a lot to get your head around. There's no map either, something which is sorely missed. Combine this with a style of gameplay that requires you to explore areas to gain skills and you can end up feeling lost very easily. With no clear indication of where you're supposed to be going, the experience can at times feel like a drag. This is especially true in the last world, much of which takes place above ground in a series of air bubbles.

A handful of boss battles are also included. Most of these are challenging but enjoyable. The one lazy exception is where you have to take on a swarm of regular enemy wasps, one of the most annoying creatures the game has to offer.

It's clear to see the graphics employed are pretty special. The first world in particular with its warm colors on the trees and rocks, and background animations giving the impression of an environment teeming with life. The artwork manages to pull off being bright and vibrant without being too cutesy, there's still an air of menace going on. 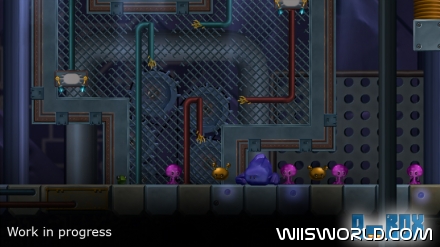 A decent effort has been put into the audio too. Each world has its own music track, as well as a clink-clank tune when you're inside the robot. The tracks are generally of good quality. Not the kind of thing you'll remember for long after powering down, but they definitely succeed in adding mood.

I'd emphasize that Robox is best suited for the core crowd, the game is unapologetically difficult. Perhaps too difficult for its own good. With an added map to help the player or better guidance through on-screen prompting the experience would have been much more enjoyable. As it is, it feels like the ambiguous game world and its mechanics are working against you and it becomes tiring.