Despite Sega releasing the Sonic Advance and Sonic Rush titles on portable systems like the Game Boy Advance and DS, there hasn't been a 2D Sonic game that has felt like the Genesis/Mega Drive originals in more than 15 years. With Sonic the Hedgehog 4: Episode 1 Sega begins what they hope is a return to greatness for their company star. Do they succeed?

The story in Sonic 4 is thankfully simple compared to the overcomplicated and irritating tales seen in flops such as Sonic and the Black Knight and Sonic and the Secret Rings. Occurring right after Sonic and Knuckles, Dr. Eggman/Robotnik still hasn't given up on his plans of a machine paradise with him as ruler. Naturally, Sonic follows to stop him and the game goes from there. Also in direct contrast to the more contemporary Sonic titles is the fact that these are the only two main characters in the game, with not even Tails as a co-op sidekick. No cut-scenes or terrible voice acting, just normal old-school action here. 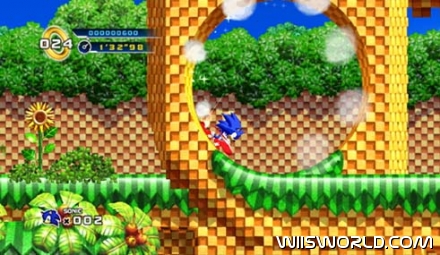 The graphics are quite good, and it seems that Sega's goal was to emulate the old Mega Drive titles as much as possible, with every level and enemy taking a cue from those. The graphics are detailed but simplistic, and in some ways they resemble the old titles far too much, sacrificing greater detail for the sake of nostalgia. Perhaps a downloadable title couldn't handle greater detail, but after seeing the sheer amount of eye candy to be found in the more detailed Sonic Remake projects online (such as the Sonic and Knuckles 3D or Sonic Remake project), one wonders why Sega's own project couldn't have been as well made.

Sonic himself and the level designs are different, but not entirely changed from their Mega Drive selves. A startling difference is that this Sonic takes longer to accelerate than his old counterpart, but feels faster overall. The homing attack, which some fans have complained is too similar to things found in the more recent 3D Sonic titles, actually helps the player in keeping Sonic fast and speedy instead of slowing him down. The game contains a total of 16 main levels with a final boss at the end. Like the first Sonic, each level contains three acts, with the fourth act being a boss fight against Dr. Eggman. There are also around three levels which contain obstacles and puzzles that some players could call unfair for how easily one can manage to die in them. Overall however, the level design is very well done and does a great job of keeping a constant pace, flow and speed, something the more modern handheld 2D titles have lacked. Not only that, but despite having only four distinct worlds, each level is slightly different from the other with new elements added in each stage to keep things interesting. Splash Hill Zone for example starts off very similar to the first stages in Sonic 1 and 2, but in later levels gains things like swinging vines and pulleys to change the overall pacing and it works quite well.

In addition, the game also features new 'Special Stages', as the player once again is given the opportunity to gather Chaos Emeralds to become Super Sonic. These stages are based on those in Sonic 1, but utilize the unique twist of having the player move the stage in order to guide Sonic, instead of directly controlling him like in the original game. The player not only needs to gather a set amount of rings, but must also effectively manage their time, as there isn't an infinite amount of it to get the emeralds as there was in the original. It is now a great deal easier to get every emerald in the game as players can quickly jump into any stage they want and progress is automatically saved after every level finished. 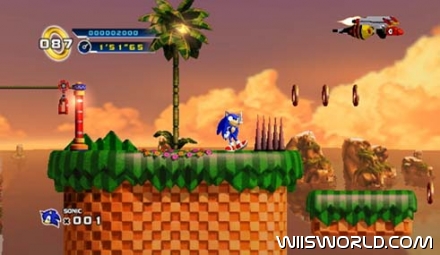 Unfortunately the music is not done by Masato Nakamura, who did such an amazing job with the 16-bit titles. Instead it's done by Jun Senoue, who seems caught between a rock and a hard place. On the one hand, Senoue seems to want more original music but also tries to be similar to the old Mega Drive titles, Midi sounding music and all. The compositions for the title, Splash Hill Zone, E.G.G. Station and Casino Street Zone are unfortunately not very good and feel like a case of trying to please everyone. Surprisingly though, the music for Lost Labyrinth Zone, Mad Gear Zone and the Dr. Eggman boss fights are exceptional and give one hope for Senoue in the next episode of the series.

For the most part, Episode 1 does feel like a true return to greatness for Sonic, but that doesn't mean it's perfect. The most glaring issue to this reviewer was that the game was in many ways too similar to the Mega Drive titles and was afraid to go off into more original territory. The stages are all based on Sonic levels from the Mega Drive collection and every boss fight against Dr. Eggman, despite having some new twists, is identical to how they were on the Mega Drive. Finally, the game likely won't last very long for most players; this reviewer finished the game in about three to four hours with every Chaos Emerald. Some may come back for the Time Attack mode and to improve their standings on the online leaderboards, but that aside there are no secret levels or modes. Taking that into perspective, the asking price seems awfully high.

Sonic the Hedgehog 4: episode 1 shows signs that Sonic could indeed be on his way back to the top. In order to keep this pace however, episode 2 needs to be cheaper and have more original ideas in it. Let's hope this series continues to accelerate without running into any speed-bumps.