Don't get too excited, kids.

Despite the relative disinterest much of the Wii owning public has shown towards the WiiWare platform in the last several years, games are continuing to be developed for it, and it persists nonetheless. Cheap, quick titles consume a majority of the marketplace and while there are a number of stellar additions to it, most games go under Wii owners' radars, and for good reason.

Triple Throwing Sports, a game by The Code Monkeys Ltd, adds to the crowd in more ways than one. A game about the simpler sports of the Olympics, namely Javelin, Discus and Hammer throw (along with the unlockable Shot Put). Makes sense, seeing as Wii is more than fit for flinging motions of the sort, but what I found was an unfortunate misunderstanding of what motion control is capable of, and how to use it in an appropriate manner. 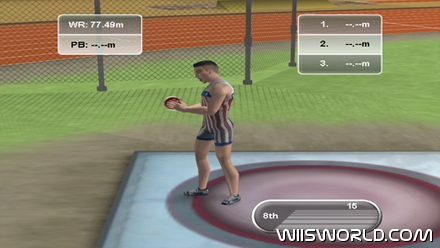 If you've ever played a pre-motion control golf simulator, then you would essentially understand the premise. As in those old golf games, the gameplay mechanics of Triple Throwing Sports revolve around the lining up of a moving tab on a bar to hit the 'sweet spot', which will in turn give you a greater distance on your throw. Three of four total sports have copied mechanics just with slightly different possible throwing capabilities (i.e. the player will ultimately throw further in discus than in shot put for obvious reasons). Each of the three similar sports involve flailing the Nunchuk to gain momentum for the throw, pressing the B button when the tab hits the sweet spot, and then pressing A while swinging the Wiimote. It's wholeheartedly unintuitive, but is at least functional, and with a short amount of practicing, it becomes easy to master.

The odd egg in the batch is Javelin, which has innately different controls. To simulate running, the player frantically shakes both the Nunchuk and Wiimote, all the while pressing B to suppress a raising bar that represents the angle at which the javelin is thrown. Then the player must press A and, again, swing the Wiimote to perform a throw when a needle points to a specific sweet spot. This can all get confusing and cumbersome, even for a seasoned gamer such as myself. But like the other sports, it isn't fully destructive to the experience and I have full confidence that anyone, with time, can understand the controls.

Nevertheless, the controls add up to being a major flaw in this small endeavor. Nintendo has proven with their Wii Sports games that complicated button combinations are not only unnecessary, but entirely unintuitive. In this case, the waggle and swinging only stand in the place of button pressing, instead of replacing the whole mechanical functionality of buttons altogether. 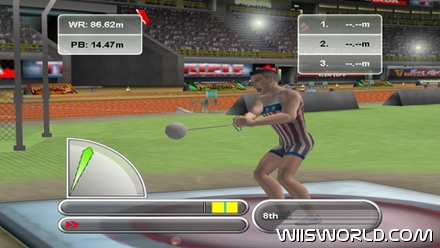 Another weakness the game presents is its horribly short lifespan. I was able to obtain gold metals in all four sports in all three difficulties in under an hour. Unless I felt the urge to keep challenging my own records, I had essentially beaten the game with no more content left besides said record challenging and local multiplayer, which doesn't do much beyond extending the life of something that isn't extremely deep to begin with.

All that being said, Triple Throwing Sports does present itself well for a WiiWare game, as the atmosphere is fully energetic and lively, even if the character models are simple, awkwardly animated, and retain the same uncanny open-mouthed stare throughout the entire game. It's colorful and makes good use within the size limitations of WiiWare. The game can be run in widescreen without simply being stretched, which is a nice addition as well.

As far as sound and music go, there's little extraordinary here. Sound effects work, and the music keeps the feel of the game from getting too stale, but that's about it. There's little to push boundaries with, and no one is going to write in about excellence in music.

With all this in mind, Triple Throwing Sports is shallow, short, and uninspired. On the other hand, it's a 500 point title and has more gameplay flare than a number of NES titles on the Virtual Console at the same price. The lesson to be learned here is that you get what you pay for. Triple Throwing Sports is by no doubt worth every point it costs, it just doesn't cost very much. And the fidgety gameplay reflects that.