Published by XGen, Developed by XGen

Time to storm the castle.

Well the title says it all. Defend your castle. As one of the very first Wiiware games available, it does a pretty decent job.

There is no specified story to this game, you just have a castle and random button soldiers raid it. You and your little bread tier have to drag them up and let them fall. Naturally, you use the Wiimote to carry and flail the army men. The A button grabs them and other buttons are used for power-ups. 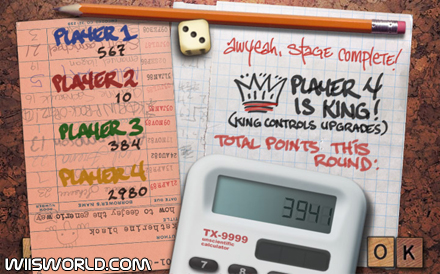 This game has very unique graphics. The animation runs smoothly and although it is not realistic in the slightest, it is a game that is memorable for it. You can clearly tell this game apart from other games in the graphics department.

After every level, you are brought up to the store menu. At the store, you can buy various upgrades to your castle. A pit of death will transform enemies into allies. You can then drop your allies into helpful towers such as engineering that will repair your tower, or archery that can help protect it. You can also research powers that can aid you. A spray can will disintegrate enemies on contact or an eraser will erase foes to oblivion.

As the game progresses, the waves will get more and more difficult. Harder enemies will appear that will have immunities to some attacks and the raid population will increase tenfold. I have only lasted to wave 39. 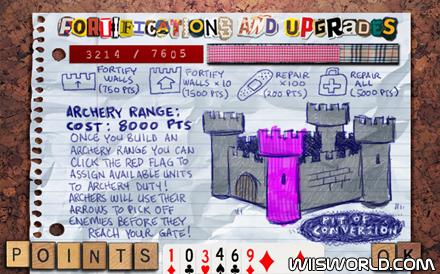 A very awesome mode on Defend Your Castle is multiplayer. Up to four people can guard the castle at once and it is loads of fun.

But other parts of this game don't shine. This game does not last very long. It may gain a few more plays if you have friends around, but this game will not something you will be playing for more than one hour a day. It is nice to play in short sittings.

There isn't much sound in this game. The only sound I hear while in gameplay is the grunting of the soldiers, which gets annoying after a bit.

Defend the Castle is a great game for get-togethers and when you have friends over. If you are just getting into the tower defense genre, this game is a great starter, but if you're looking for a more action packed game, you might want to spend your Wii points on something else.