Run, jump, glide, speed up, travel in time and break your way through the magical lands of Gnomia!

The most epic and challenging 3D journey is waiting for the bravest gamers to join in.

2 Fast 4 Gnomz has no review on Wii's World. Write a review 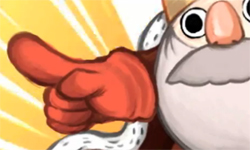 2 Fast 4 Gnomz on 3DS
Developers QubicGames have stated that their WiiWare game 2 Fast 4 Gnomz is being readied for the 3DS eShop platform. This cute...