Jett Rocket returns! Your favorite planetary inspector is back and in trouble. His arch-rival Kaiser Taikai has to settle an old score with him.

Explore the home planet of the Power Plant Posse and ignite your trusty old jet pack in this epic full-3D action-adventure!

Jett Rocket II: The Wrath of Taikai has no review on Wii's World. Write a review 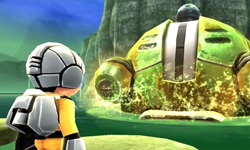 Jett Rocket sequel gets a new name
Jett Rocket was arguably one of the best games to grace the aging WiiWare platform, and many months ago its developers Shin'en Multimedia...