Published by Nicalis, Developed by Nifflas

NightSky is a unique gameplay experience that puts you inside an ambient and mysterious universe. Cerebral challenges fill cleverly designed, picturesque worlds with beautiful acoustic accompaniment.

NightSky has no review on Wii's World. Write a review 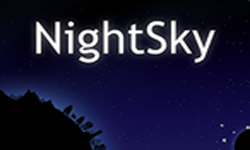 NightSky dawning on the US
The nice people at Nicalis have sent out a press release telling everyone that NightSky will be hitting the 3DS eShop on October...