You've seen them all before

When it comes to Arcade Classics 3D, the game truly provides what it says on the label: classic arcade games in 3D. How well those arcade classics are provided, well, that's a whole different story.

Arcade Classics 3D jumps right into the game the moment you boot up, placing you in a room with seven arcade machines, six of which are the games at your disposal, and a seventh machine that contains your high scores for each of the other six games. At this point, I recommend that you hit the home button in order to access the manual, because in no other place does it give you the controls. Beyond that, all that is left is to describe each of the games. 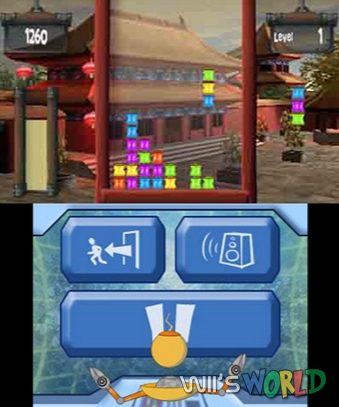 JEWELS: If you didn't already guess, this is played very similarly to Bejeweled. The object of this particular game is to choose a jewel, and then swap it with a neighboring jewel, in order to place three or more of the same jewels in a row and eliminate them from the board, causing more to fall into place. Upon clearing a certain number of jewels, you are moved on to the next level, with more of the same jewels. While the 3D graphics and music are pleasant to the eyes and ears, the gameplay becomes stale fairly quickly, as no new colors of jewels, or any other challenges, for that matter, present themselves at any point. Continues are lost when moves that do not result in the clearing of jewels are made, and the only way to exit the game with your score saved (tapping the exit button causes you to leave without saving progress or score) is to get a game over. That said, I had to try to lose the game to get out of it with my score.

BOUNCE & BREAK: This particular arcade classic, a take on Atari's classic BREAKOUT, is a far more engaging experience than many of the others in this title, and is one of the two or three redeeming qualities of this collection. The controls of the paddle are on an oh-so-slight delay, providing the mental challenge of having to predict where the ball will fall next. Meanwhile, power-ups will fall from broken blocks occasionally, and at a painfully slow pace, requiring further mental efforts to anticipate if and when to grab them. The music and 3D elements of this arcade game do a good job of having presence without being a distraction.

BLOCKS: This was the arcade game that I looked forward to the most, and was the most disappointed by. Blocks is supposed to be a clone of Tetris, and, graphically speaking, it looks the part. The heart-breaking reality sets in as soon as you attempt to control the game at all. Blocks move sluggishly from lane to lane (as opposed to the instant movement found in Tetris), and holding down to speed up a falling piece only speeds up the piece by a small margin, making BLOCKS a brutally slow game to play. 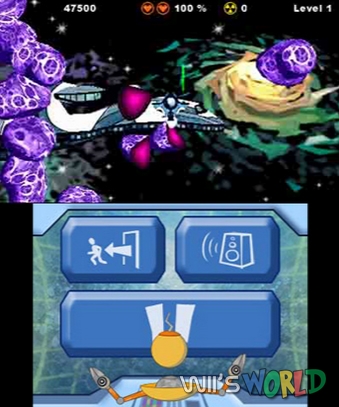 SWAP: This is a clone of the Sega Genesis game Columns, in which you have falling pieces, not unlike Tetris; the difference being that rotating a block is replaced by swapping the order of the colored pieces that make up your falling blocks. By getting three in a row, all adjacent pieces of the same color are eliminated. This is almost a good game, except that it shares the same crippling slowness as BLOCKS, making it hard to enjoy. Which is a shame, seeing as SWAP and BLOCKS both sport some of the prettiest 3D graphics of the collection.

POP IT UP: Ever play Bust-a-Move? Pop it up is a bubble-launching clone in which the player must angle a launcher to fire bubbles into the game grid; matching three or more of the same color bubbles causes them to pop, and drops any bubbles that were attached below them as well. This game is another bright spot, as the levels get progressively more difficult, and is overall much more engaging. This arcade classic in particular makes great use of the 3D graphics, making POP IT UP the go-to game of them all.

IMPACTS: This clone of the arcade classic Asteroids, I'll admit, is a major step up from the original. You are given two different options for weapons to fire, and occasionally you can pick up a power-up that will let you clear a good chunk of the asteroids on the screen at once. Moreover, rather than instantly exploding upon contact, your ship has a shield that depletes with each impact, increasing the longevity of each round. The only real drawback to IMPACTS, in fact, is that the audio and visuals fall kind of flat.

Arcade Classics 3D, overall, feels a little like it was rushed to publication with little play-testing, and for that reason, I would not recommend it if you were looking for a way to play the classics that this game clones. However, if you have an extra two bucks in your eShop wallet that you likely won't miss, then why not pick it up?