Bike Rider DX2: Galaxy is an excellent game. If it were released in the days of the NES at fifty U.S. dollars, it would likely be heralded as one of the greats. It wasn't though - It was released last year in the U.S. and is currently priced at $2.99.

This game rocks for all the right reasons. First of all, the gameplay is terrific. The player controls a tiny bike in auto-scrolling stages going from left to right. You start off jumping over a few cliffs, and then the game adds in obstacles and different types of platforms. The general rule is to make it to the end of each course without dying. In addition, there are three coins to each stage. Beating a stage unlocks additional stages, and collecting three coins without steering your bike left or right will net you a golden crown for that one stage. 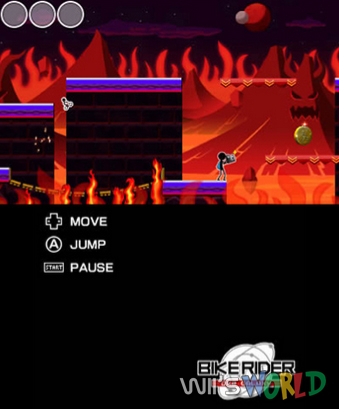 The beginning concept is simple, but as you progress further you will likely find the game to be more difficult. The tracks become longer and more arduous. Later stages introduce more obstacles as well as items that allow changes to the physics and motion. There are five tracks to each stage, and there are a total of twelve stages, adding up to a total of sixty levels. At first, jumping over a few rocks and collecting some easily placed coins will likely not break a sweat on one's brow; However, later on, the placement of coins feels almost criminal. The difficulty curve is excellent - balanced so a casual gamer can begin, and so a dedicated gamer is in the weeds by the end. If you're still up for more after that, there are extra stages available as DLC, and it only costs two dollars for all of it.

This game is a bargain. If you beat all of the stages, you can take on the time attack mode, in which you see how long you can survive on an auto-generated stage. This is an addictive mode, and it becomes even more so after you post your scores to the international online leaderboards. Add in an achievement system and you've got one beast of a game. This one stands not too far in quality from other runner-type games like Bit Trip Runner 2. It's really that good.

The music is also excellent, and fits perfectly with the colorful graphics. The tunes range from upbeat synth-pop to full on speed-metal. You'll find yourself on a tropical island level with a Caribbean-style jam, then on the moon with some spaced-out techno, then in a fiery inferno with dual-solo guitars and pounding drums. Each tune sounds great with each stage and only gives the player more reason to advance through the ever-increasing difficulty.

If you're a fan of the Bit Trip Runner series, or HarmoKnight, or rhythm-based action games in general, I can't recommend this game enough. It is very affordable and is simply fun to play. Go for it.