Cypronia's Bubble Pop World is a clever little game that uses the AR card provided with every 3DS system to generate a series of bubble puzzles. Lay the AR card on a brightly lit flat surface, let your 3DS register it, and then presented on the screen will be a bubble image for you to pop using different colored bubbles.

The gameplay mechanics are quite simple, marred only by the shifty nature of the level on the screen. Sure, it mimics an underwater setting, but I can't describe how many times I'd be aiming a bubble at its like-colored brethren when all of a sudden the image would disappear because I'd needed to aim higher or lower, or, because it's nearly impossible to hold the 3DS so still that the game won't register every slightest movement, my aim would be thrown off and I'd need to start over. 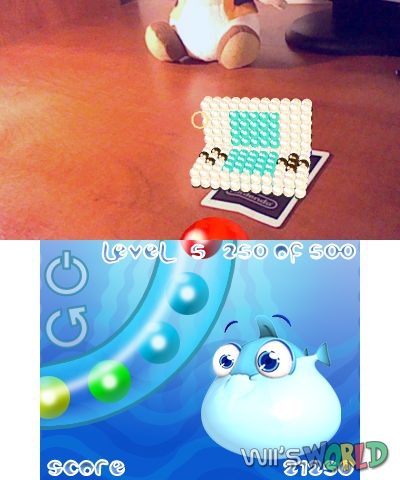 For what it is, Bubble Pop World can almost be addicting, but when the controls get too sensitive it only becomes frustrating. It is at least easy to understand: throw red, blue, yellow, green, or rainbow bubbles at their like colors composing the image on the screen. The challenge lies in the ability to only throw a certain number of bubbles in a certain order. That's where the puzzle element to the game comes in, though players should rarely find themselves stuck on levels.

However, as I've already said, sometimes crucial moments are ruined when all of a sudden the aim of the bubble gets bumped, sending it sailing to a useless place. It's absolutely necessary to use the reticule aimer in order to determine where a bubble will land once thrown, otherwise without it the more complex levels become somewhat impossible as the bubble will land someplace you didn't think you were aiming at.

The graphics in this game aren't mind-blowing, and in fact most of the time you'll be looking through your 3DS' camera instead of at rendered set pieces. It works for this game, but it's hard not to feel the game's actual graphics are a bit bland. 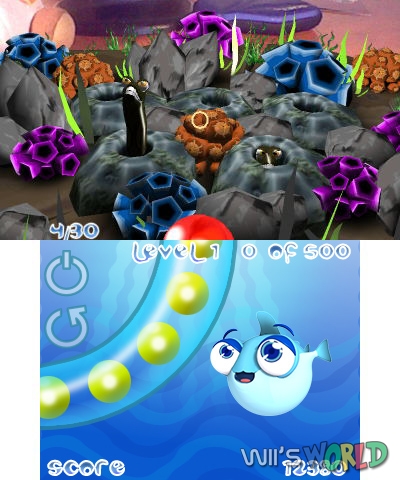 The menu music can get a bit annoying too after a while, but fortunately the music during puzzles provides a more calming experience and easily blends into the background.

If you get tired of playing the puzzles provided in the game, there's an editor where you can create your own levels and share them online. You can go in, create the image you want with whatever colored bubbles, and then you can determine the bubble throw order as well. It can be an entertaining way to pass the time, and if you feel like it you can play levels other people have created as well.

Bubble Pop World is certainly inventive, and it should be commended for its use of the AR card. Its level designs aren't bad at all, and while it shouldn't be hard to breeze through the game, there's fun to be had popping bubbles. It just gets irksome when the image disappears on the screen or the aim gets touchy and can't decide where it wants to stay.