Bubble Pop World is a 3D match-three game in which you pop bubbles with the same colors. It is based on Augmented Reality technology, so the Nintendo 3DS AR Card is required. There are 120 puzzle and arcade levels to enjoy, or you can edit more of your own levels and share them with friends via QR Codes. In Arcade Mode you also travel around the world to discover undersea mini-games.

Cypronia's Bubble Pop World is a clever little game that uses the AR card provided with every 3DS system to generate a series of bubble puzzles. Lay the AR card on a brightly lit flat surface, let your 3DS register it, and then presented on the screen will be a bubble image for...read full review 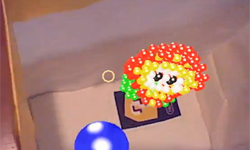