Cocoro Line Defender is best described as a 2D Tower defense game. You play as different elements who are in a war and must defend your base while attacking and eventually destroying the opponents' base. You're given different units, weapons and one special attack to accomplish this, but it all falls a bit flat.

Cocoro Line Defender struggles with many aspects, one being its pacing. Levels don't seem to progress in difficulty as you play, you will breeze through three or four levels, then come up to one extremely tough level which ends up feeling cheap and frustrating. The game also boasts 90 different unit combinations, which is true, but they all feel exactly the same. Having two units and giving one slightly more health and calling it new is lazy and it shows. 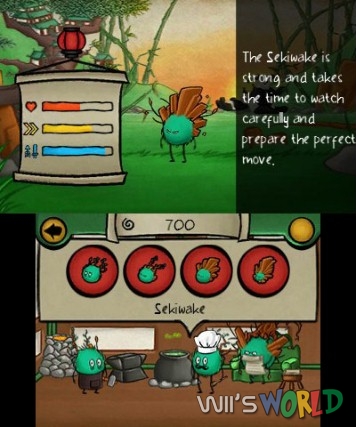 You get four different units and six different weapons. The biggest problem with the game is the lack of variety. Everything feels the same, you don't feel like you're making progress at all. Every map plays exactly the same as the last and you end up just going through the motions. You will get bored very quickly. You get to play from each side's perspective, but there isn't any difference except the color of your unit and it ends up being completely pointless.

Cocoro does have a few good ideas though, you can upgrade all your weapons multiple times and instead of units just walking out onto the battlefield, you must throw them with the stylus. This adds an extra dimension to the usual tower defense gameplay. That being said, it's hard to get used to and I still find it difficult to throw multiple units in a row and get them to land together, it's also incredibly hard to make a unit just go out the door, you have to awkwardly tap him out the door and even then, it doesn't work 100% of the time.

The best aspect of Cocoro is the art style, the game has a Japanese watercolored inspired art style. It's incredibly beautiful and done very well, making the experience absolutely gorgeous to look at. The music also fits the game style well, but it can get repetitive.

Overall, Cocoro Line Defender is hard to recommend even with its cheap price tag. The game lacks any sort of deep gameplay with everything being so repetitive and boring. Nothing stands out in this game. Everything feels very average and there are better alternatives out there. Don't bother defending your line, in fact, don't even bother showing up to defend it in the first place.