Published by Tom Create, Developed by -

When you just can't get enough zombies.

Taking control of Johnny Johnson, last surviving soldier in your platoon, you are trying to get back to your base so you can escape the city before the incoming air raid that will destroy all of the zombies and the city itself with it. The difficulty that is chosen at the start of the story mode translates to how much time you have to escape the city. There are some gatchas with the timer, though. When you pause the game, the raid timer will continue to countdown, so there isn't really a pause (outside of closing the 3DS and putting the game into sleep). The other factor against time is death. Instead of extra lives, continuing knocks time off of the clock so the raid will happen sooner. 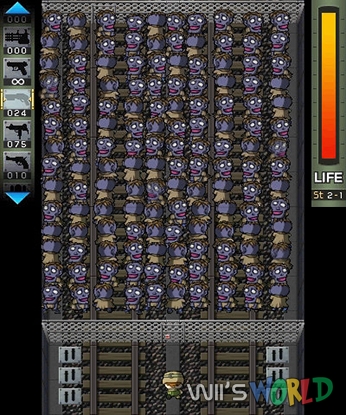 The gameplay consists of playing from the bottom of a level, finding the key that will let the player get through the door at the top of the level. Along the way you'll have to kill nearly every zombie that is in your way as well as save any civilians that might be standing helplessly around before they are attacked by the undead. Throughout the levels you'll be able to pick up ammunition that can be used for the various weapons at Johnny's disposal. The armaments include the pistol (which has infinite ammo), shotgun, machine gun, magnum, flamethrower, grenade, flare and a chain gun.

The biggest issue with the guns is the ammo never seems to be plentiful enough to make using them worth it. While it's great to have 200 bullets for your machine gun, the ammo depletes so quickly that you end up feeling you should only use it for rare occasions and just rely on your pistol to get you through most of the game. This wouldn't be so bad if the pistol didn't have such a slow rate of fire and a slow cool down that follows each shot. Top that with the fact that the best way to accurately hit the mass infected is to press the R button and aim at them, stopping Johnny in his tracks. It makes for a much slower paced game, which wouldn't be so bad if the game weren't based on you making it quickly through the levels.

All this unfortunately leads to the game feeling very repetitive quickly, causing it to be better in short bursts. The sound design adds to this with the same, very short music piece, playing all the time and only a handful of different zombie sounds that you'll hear over and over in succession. The weapon sounds are all unique, but again, you rarely want to use them in the story mode so you won't hear them too often unless you're in a tight spot. Mainly when it comes to vast hordes and boss fights. 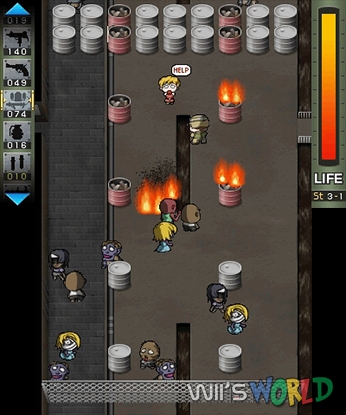 Luckily story mode isn't the only option, though. There is an Endless Mode that has the player select one weapon type and play through every level of the game to see how far they can get with one life. Amazingly, this is where the game really thrives because there is something incredibly satisfying about going through levels you went through at a slower pace with a flame thrower and mow down all of the zombies that get in your way. The only issue that comes up here are the boss fights which still seem a bit unbalanced due to control of the player not being great unless you stop to aim which usually ends up with Johnny taking a bullet or three until you master their patterns. Either way, Endless Mode is something that will easily draw players back if it's their sort of thing.

Escape From Zombie City doesn't make use of 3D in any way which is a bit odd since it's on the 3DS eShop, but the art style is cool enough (and very much 2D) that it's quickly forgiven. It was a smart move to develop the game without worrying about 3D rather than find some way to tack it on (like just popping out the UI).

If you're a fan of 80s arcade shooters, it's hard not to recommend Escape From Zombie City. The price is worth the amount of content given and it's easily something that you can go back to to kill some time if you're not in the middle of a bigger game. While the story mode is slower paced than the story would make it seem, Endless Mode saves the day making it a game that, while not perfect, should at least be tried if you have an interest in the genre. Or zombies.