Soldier on, soldier on

Years of Call of Duty have made us into armchair military strategists. However, do we really understand how to control an army?

European Conqueror 3D is a turn-based strategy game, that places the gamer in control of a number of armies throughout World War 2. As the leader of one of four nations (depending on the campaign), you must command various battles that rocked Europe to its foundations. 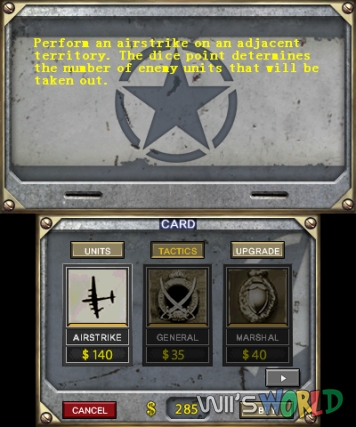 This single player game is a bare bones experience that forces you to be resourceful and have multiple back up plans. The bread and butter of this game is the campaign which has three difficulty levels (1-3 stars) and four playable countries. Only Germany is unlocked at first but as you progress, you are granted access to Great Britain, France and the USSR.

In each level you must fulfil a certain condition to complete the battle. These conditions range from successfully destroying the opposition's ranks of infantry to capturing the HQ of Operations. The game itself is a geographical map plastered with tanks, warships and soldiers. Each of these things represent what units you have located in each section of the countries. Also, in the top left corner of the screen, you are able to see your funds. The lower screen is just an entire map of Europe and doesn't utilise the 3DS' hardware effectively at all.

The game allows you as much time as you like to take your turns in which you move your units and attack the enemy. Something that adds surprising strategic depth is that you can only station one type of unit in a location. Upon the completion of your turn, you are given tax money to spend on your next one, and the opponent takes their turn. Rinse; Repeat. 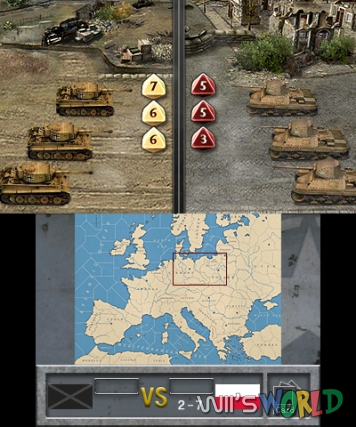 This is as much depth as the game allows, however, European Conqueror 3D also relies heavily on luck. To attack the enemy, you must initiate a battle. In these battles, you can send up to five of a unit (so five tanks or soldiers) to meet the enemy's units stationed there. Once the battle is under way, each tank has a dice roll. If the number rolled is greater than the enemy's, your tank blows up theirs. Unfortunately, this system is not a particularly good one. It means that no amount of strategic perfection is 100% solid. You can lose a battle even with unbelievably good odds. This is my only criticism of the game's core mechanics.

Another twist of the secure and control gameplay is the addition of 'cards'. Cards are your upgrades. With these, you can develop sections of land to gain more income, convert units to seafaring battleships and create fortresses to lock down a position. Alternatively, there is the 'air strike' option. Using this option, you select an enemy controlled territory and rain bombs on it with a plane. A dice roll leads to the number of units that will be destroyed. I found an easy way to secure an enemy's HQ and ensure victory was to get close with tanks, rain air strikes to leave it undefended, then march in. Ultimately, you need to carefully select your cards in order to win.

The only other mode of play is the 'Conquest' mode. It's basically the same thing, but with all countries and only one goal; destroy all units. Nothing special, but this could be a good way to kill time. 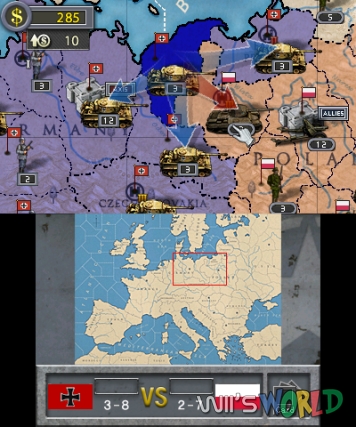 In terms of graphics, they're okay. The 3D in the title doesn't provide much excitement once you realise that the game has no 3D characters but instead, drawn art. The graphical style is similar to the Metal Slug games but a little more realistic proportionally. The sounds are okay too. The gunshots sound fine, if not a little degraded, and the music is there but it's forgettable.

For young people who like the fast paced action of the newer war games, you won't like European Conqueror 3D. It's slow with few mechanics to hold interest. For older seasoned gamers, this could be a real hidden gem. Once you play this game, time will fly, especially if you are happy with micro management.