Whether expansion or sequel, Fallblox is still great!

Roughly a year ago, Intelligent Systems released Pullblox, their first original title in quite some time. Though not tied to a familiar Nintendo franchise, Pullblox was nonetheless a great game, utilizing the 3DS' capabilities to make what could be considered a 3D combination of Jenga and Tetris. A year later, Fallblox comes to the eShop with new features and levels but roughly the same gameplay. Thankfully, even if players have managed to conquer Pullblox, Fallblox is still a title worth having in their collection.

Players once again take on the role of Mallo, an adorable... 'thing' that looks like a combination of a sumo wrestler and a Waddle Dee from the Kirby titles. Mallo's job is to push and pull a combination of various sized blocks in order to make a goal to an exit, usually at the top of the structure. Initially the game makes it easy on the player, and it seems simple. Things quickly ratchet up in difficulty however, as new mechanics like having small blocks drop onto bigger ones, pushing blocks sideways while atop different blocks and utilizing gaps found in the middle of bigger blocks all become essential to solving the fiendishly difficult puzzles. 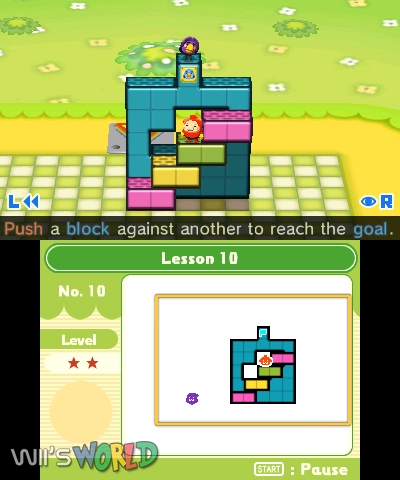 Fallblox adds more than just new puzzles to the experience however, and features several new gameplay elements. First and most important, Mallo can finally fall off structures while pulling blocks into different positions, unlike Pullblox. This might not seem like much, but it adds both a new layer of strategy and complexity to the puzzles. Also included are manholes which are similar to warps in other games, Doors which are similar but can only be accessed from the front and back of structures, cloud blocks which never fall, and Move Switches which can remotely move certain blocks. When adding all of these new gameplay elements, it becomes debatable whether or not Fallblox is an expansion to Pullblox or a genuine sequel.

Considering that it is a downloadable eShop game, the graphics in Fallblox are decent, and with the frame-rate, animation and 3D effects all well done, there certainly isn't anything wrong with how the game looks. That said, it is a little irritating that there aren't more visual options. Different characters and backgrounds would have at least helped differentiate the experience and would have been welcome.

For the few musical tracks that it features, Fallblox has some great instrumental pieces. Unfortunately there are only about 3 to 4 different ones, and the repetitive nature of the songs and sounds will likely grate on players during long sessions. Thankfully, Fallblox's gameplay is more important than sound, so players could listen to any music if they wanted to during the game. 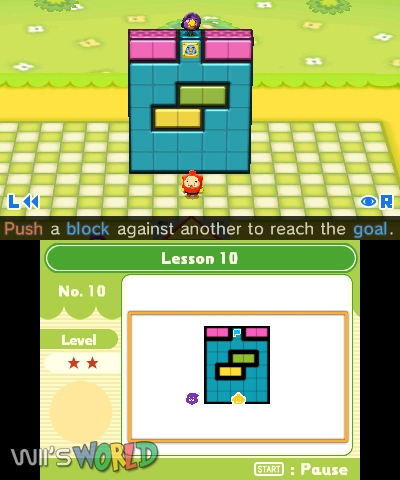 If anything, Fallbox's lifespan is actually better than its prequel. Not only is the player given 100 'story' levels, but finishing those nets an additional 40 Level B challenges that are even tougher than the earlier puzzles. In addition, the 'prototype' puzzles give the player more puzzles that are variations on the standard Fallblox rules, meaning that they will have to even further think outside the blocks... ha ha [good one! -ed]. As if all this wasn't enough, Fallblox also includes the puzzle creation tool from its prequel with the option to share created puzzles online with QR codes. With all of this content, Fallblox will last players quite a while.

It may be an expansion or it might be a sequel. Either way, unless players have gotten sick of the gameplay of Pullblox, any gamer who enjoys a good puzzle will love Fallblox.