Published by Shin'en, Developed by -

If you're looking for a reasonably priced sports game on Nintendo 3DS' eShop, the enthusiastically named Fun! Fun! Minigolf TOUCH! by Shin'en Multimedia presents itself as a tempting offer.

Shin'en are known for quality output that takes full advantage of the underlying hardware. This is a port of an earlier WiiWare game, Fun Fun Minigolf, which was itself quite impressive in the graphics department. The visuals have made a successful leap onto handheld, with stereoscopic 3D to boot. 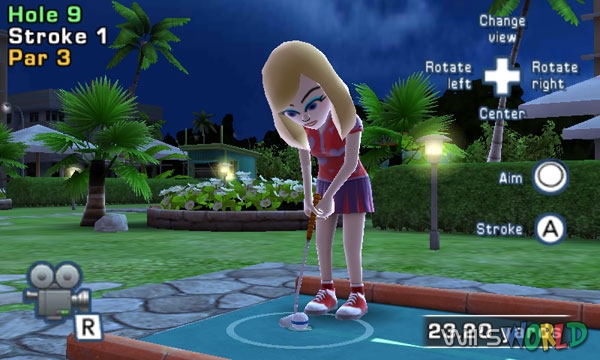 Golfing action is spread out across three brightly colored courses: USA, Europe and Asia. Each one has nine holes. From the get-go, quite a lot of emphasis is placed on earning coins as you play. These coins are then used in the game's virtual shop to unlock more tournaments, the ability to play as your Mii or frippery like novelty golf clubs.

Even in more advanced tournaments, the same basic courses are reused constantly, but with added barriers to increase the difficulty level. The lack of true variation as you progress through the game is a little disappointing. Advertising blurbs for FFMT boast a selection of 81 holes to play, which may technically be true, but since two-thirds of them are rehashed you can't help feeling misled.

As far as the gameplay mechanics go, there's little to complain about. You have the option of using touch-screen controls, or the classic thumbpad and buttons for a more old-school approach. The camera functions are generous too, you can pan around the current level at any time, so you always have a good overview of what you're trying to achieve. 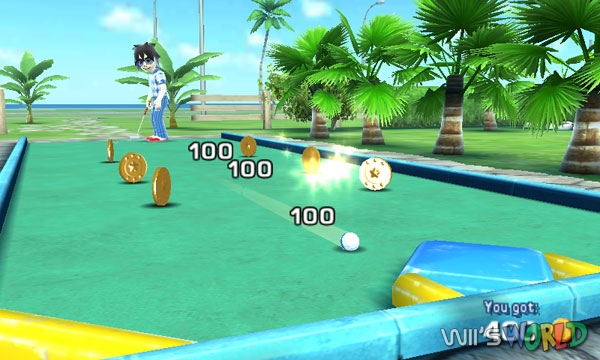 Now I'm no advocate of shoehorning multi-player modes into games that don't need them just to tick a box on a features list, but FFMT's lifespan would benefit greatly if you could challenge your friends to a round of mini-golf. Shin'en has seen fit not to include any multi-player action at all. There's no online, no local Wi-Fi, not even a mode for two separate players to take turns using the same machine. This glaring omission means that by rights, at least one of the "Fun!"s should have been removed from the name.

Fun! Fun! Minigolf TOUCH! has a decent "pick up and play" factor going for it, a round of nine holes can comfortably be played in less than ten minutes. You'll likely see everything the game has to offer within a few short hours, but its core gameplay is enjoyable enough to repeat the experience once in a while as a light relief from boredom at home or on those long journeys. It's also simple enough to play that children and inexperienced gamers can take part in the fun.

All in all, this is a game that falls a little short due to a lack of unique courses and the omission of any multi-player modes, but there are worse games you could spend your eShop money on.