Every now and then a game comes along that redefines the medium in a carefully, exquisitely formatted package. Sometimes the right combination of story, gameplay, and overall spectacle magically transforms what could have been average into a masterpiece of design. Does Liberation Maiden, made by Grasshopper Manufacture and available exclusively for the 3DS eShop, match that elusive pinnacle?

On most accounts, no. Liberation Maiden is not going to proudly sit on the best games ever list. And no, you will likely not think all that much of it years after playing. But even if it's a game that won't stick with you through the eternal march of time, Liberation Maiden is still worth more attention than it received. 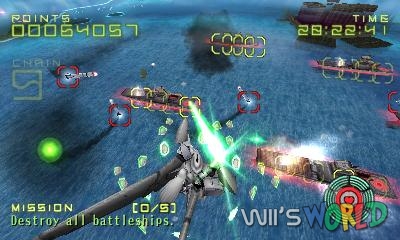 Right off the bat, Liberation Maiden wastes no time pulling you to arms. It does well to ease the player into a rudimentary understanding of the rather complex control system, but you will likely not feel horrendously overwhelmed.

Throughout the experience, one major deviation from normalcy will keep you on your toes: you pilot a mech and the ammo and shields are one and the same. Essentially, you use crystals as both the ammo to your weapons and also shields against attacks. This means that both firing weapons and getting hit cause the bar to drop. Of course, the bar regenerates, and does so quickly if you pull off combos, but the sheer ferociousness of the gameplay leaves you firing quite a bit and getting fired at quite a bit more.

Get hit when the bar is low and the bar's maximum count drops with it. Lose any more and you're out a bit of HP. The difficulty in this system usually comes from how long it can take for the bar to recover its dearth, meaning you ultimately spend an unfortunate amount of time unable to fire more than a few rounds and dangerously close to a game over. It can be as riveting as it is frustrating, and ultimately it comes down to the player's resilience to withstand the pressure. 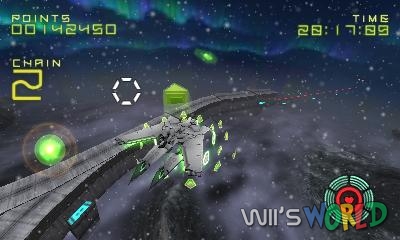 Levels are broken down into fights against stationary conduit spikes (small, well defended structures planted in the ground) and larger Greater Conduit Spikes, which serve as boss fights. It's a basic structure, perhaps, but the levels themselves run deep with visual variety and the boss fights offer both tremendous difficulty and abnormal challenges. Not on the level of boss fights from an Atlus game, but they manage to be interesting to both look at and fight against.

Premise-wise, Liberation Maiden makes strides forward then a few, sullen shrinks back. You play as the mech Kaihoki, piloted by future president of New Japan, Shoko Ozura, in a fight to restore peace to what seems to be the war-torn remnants of major cities. Unfortunately, while the world and setting feel rife with action and eccentricity, the story lacks in transparency and depth, at least before you unlock and read the numerous gallery posts that provide necessary background information. It's too bad, because a little more in-game contextualization would have made the conflicts that much more meaningful.

It's natural to get a little confused as to just who New Japan is fighting, and why. But a little reading and you discover that a war broke out over power with another, newly formed nation (whose flag looks suspiciously like that of China's). Makes sense, but again, better delivery of back story would have been a potential improvement. 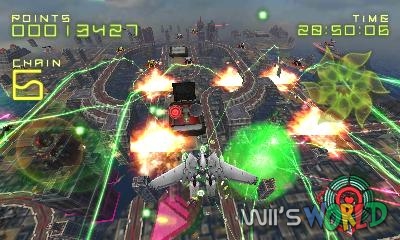 Visually, the game shines but doesn't quite sparkle. While certainly no slacker in raw visual variety, the game lacks the sheen now common to 3DS games. Water isn't quite as shimmery as, say, those found in Star Fox 64 3D or Kid Icarus: Uprising, and much of the environmental polygonal makeup is simple. But like the gameplay, the visuals rely more on eccentricity than flare.

Liberation Maiden does make up for any visual disparity by including some very stylish animated cutscenes by Studio Bones (of Fullmetal Alchemist and Soul Eater fame) and fantastic voice acting. Even if graphics are at any fault, the overall presentation has enough going for it to warrant a high grade.

It's no surprise that Liberation Maiden has adjectives like 'eccentric' and 'unique' attached to it in bold. Suda51 has made a name for himself in the realm of inane design, and in the context of his other work, this manages to hold its own rather well. In all, Liberation Maiden is charming, challenging, and crazy. In a medium overrun by tired tropes and endless copies, it's always nice to see something original, even if it's a small original. Lengthwise, it likely won't take you any longer than four or five hours, and that's only if you invest more time beyond a single playthrough on Normal, but the overall experience leaves an impression of quality and fun.