As a series, Picross has a lengthy history by this point, the first version on Game Boy featuring Mario himself came out nearly eighteen years ago. For the uninitiated, a picross is a picture puzzle, known outside the Nintendo universe as a nonogram. These puzzles take the form of a square grid and are solved using logic - something like a more visual, gentler version of Sudoku. Our latest video game incarnation from longtime developers Jupiter is Picross e2, a downloadable title on Nintendo 3DS.

The game wastes no time with lengthy introductions and greets you with the main menu screen. Newcomers can choose a 'how to' tutorial, which plays out using a sequence of slides. This does an adequate job of teaching the rules, although perhaps by today's standards something more dynamic and engaging would have been good. There are five modes to choose from, although in honesty four of them are the same. Easy mode is the first port of call for anybody who is inexperienced with Picross, or just rusty. Here you'll find some 5x5 puzzles which should prove to be a breeze. From there, the difficulty ramps up sharply with 10x10 grids, and eventually 15x15. 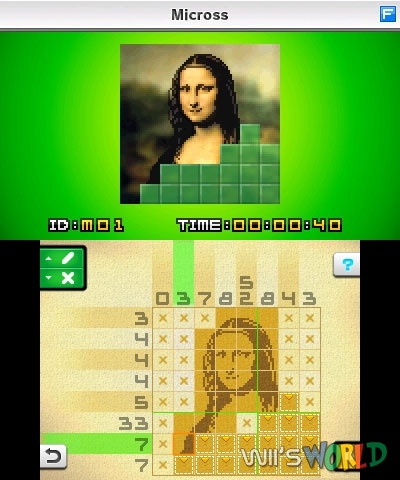 Picross e2 boasts 150 puzzles, enough to keep even ardent puzzlers busy for some time. How much time that is depends on how adept you are with logic, but based on my rudimentary guesstimations most players can expect 25-30 hours of gameplay in total.

This style of game will never win any awards for graphical achievements, but Picross e2 is presented cleanly in a modern way befitting the 3DS. The goal of Picross has always been to uncover the hidden picture underneath the grid, and this new outing is no different. On completing a puzzle, your pixelated prize is presented as a colored sprite in stereoscopic 3D. It's still quite crude and often you'd be hard pressed to tell what the object in question is without the text description, but you still get a nice sense of achievement. The background music is deliberately low key, but serves to give a feeling that you're making impressive progress, even when stumped.

You can choose from two methods of control, either using the stylus, or physical buttons. For my money, a stylus and touch-screen are the most efficient and enjoyable way to play. Larger 15x15 puzzles push the lower screen's dimensions close to their limit, in these instances the grid squares become a little small. With careful stylus work it's not a great hindrance, but in truth I found it did affect my enjoyment to some extent and I preferred the earlier puzzles which were able to be presented more boldly. It's also worth mentioning that I'm playing this game on a 3DS XL, I can imagine on an original 3DS things would be even more cramped in the later stages. Perhaps that's why the developers included button controls as an option. 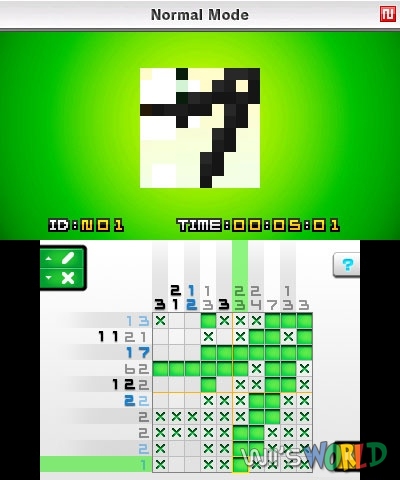 A fifth mode of play called 'Micross' offers something a little different, albeit in a familiar way. In this mode, a much larger picture is broken down into smaller (micro) sections for you to work on one at a time. The scale of these pictures mean they are more impressive when you finally finish, but the micro-sections themselves don't always make for good puzzles - often feeling more like an exercise in 'coloring in'.

All in all, Picross e2 is an inoffensive title which should appeal to a broad range of puzzle fans as well as existing picrossers. For the asking price of £4.49 there's a decent amount to do, although it doesn't really outshine previous entries in the franchise and lacks a little in personality.