Published by Ripstone, Developed by -

The purest of chess video games

This is the first 3DS game I have reviewed in quite a long time, and this is one of the most exciting games that was announced. The most intense and spine tingling game ever made is now on the 3DS, that's right, Pure Chess. As I do joke about the board game, it's still a very popular thing that has its own tournaments worldwide. And for it to hit the 3DS could have die hard Chess fans swarming all over this game.

We have all played our fair share of chess and have either mastered the art or suck epically at it. This game gives you justice as it can take you through the baby steps of chess. Board games have slipped down now when it comes to popularity compared to video games in recent times. Now a video game of a board game could offer a wonderful opportunity for more people to love chess. 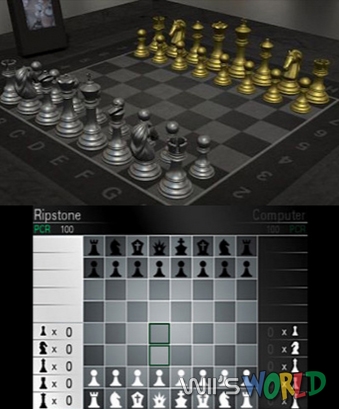 Right, Pure Chess is exactly what it says on the tin. Whether that either impresses you or bores you will have an effect on what I am going to write next. Pure Chess gives you loads of options to do, but for anyone who hasn't had decent chess experience I'd suggest the tutorials.

Learn To Play offers a great tutorial that makes something very confusing look very easy to do. It teaches you about what each of the pieces are called and how they move across the board. You go through several brief steps until your knowledge is full of tactical gameplay and smooth moves. It gives you the insight on how to not concentrate solely on the chess piece that is the closest to taking the opponents king down. It gives you scenarios on how to be sneaky and aware of how to take the king down in a few steps. Now with all this knowledge in mind it's time for the real action to begin.

You have another section where you can do chess challenges as well as playing in a tournament. These features are great as it adds more variety to something that appears to be dull through most people's eyes. It's another learning curve in the world of chess and shows that it isn't just a board game that bores the hell out of most people, unless you're either old and won't bother with kids and their rock n roll music, or a chess genius that does nothing but slay other chess players for an ego boost. 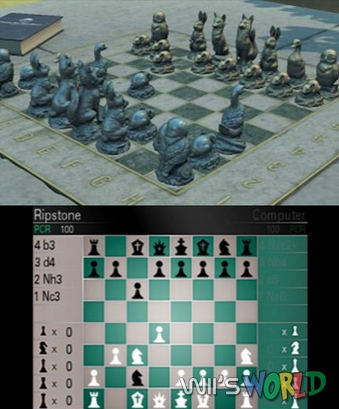 There are a wide variety of challenges which really know how to get your brain ticking. It starts off easy as you have to pick out an ultimate move to make sure you get checkmate, but after all that it gets more difficult as you have different situations to have a good think about.

As dramatic music plays in the background, your sole mission is to kill the king. I like the music, but it gets too intense for something like chess. It's orchestral and it has elements of dark ambiance, which is cool but on the odd occasion it's quite overwhelming. There is the choice to change music genres, but don't expect anything as heavy as Carcass, the choices are classical, jazz, chill and nature, so like I said, it's dark and ambient, even the jazz has an eerie feel to it.

The difficulties you should go for depend on your chess experience. The 'monkey' difficulty is nice and simple, with novice difficulty giving you a run for your money if you're either new to this or you haven't played in a long time (*ahem*). You actually have a choice of scenery to which you can play your chess games in, which seems a bit pointless to me, but it's a nice feature rather than the game dragging through into the gameplay. The camera is fixed on the board itself, so it's not like scenery makes a big difference. 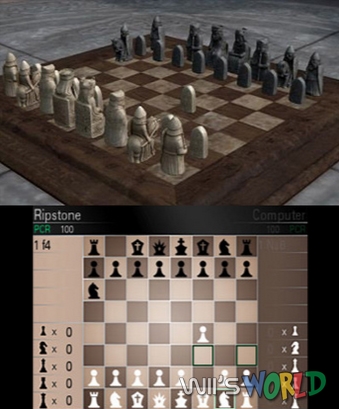 You get a choice of chess pieces, I can't imagine anyone being too fussy about that, but I think it's great feature, though the DLC is questionable, cheap as it is. The graphics in the gameplay aren't anything special, I wouldn't expect them to be either. However, the chess pieces look a lot better in 3D than they do in 2D, which is nice to see how the 3D effect can improve experiences. There are other interesting things about the game as well, it even keeps a hold of your statistics, which is bad for me as I have a terrible record, so if you want room for improvement and motivation, then the statistics are there for you.

One feature here I am quite proud of is the online play, however it is very sluggish and it's not as polished as it is on other platforms. Chess is one of the most well known board games ever made, and making an option for online is a great way to reach out to people, though it could have been done a lot better. At least you get to take on human opposition that makes the game more natural compared to the brainiac that is the artificial intelligence.

Pure Chess is a surprising game for me as I am slightly impressed by it. The online feature is a great idea but under par from what should be expected. Online is a feature that games should be getting right by now, as well as the tutorials. The chess games against the A.I are good when you get higher in the ranks, but it can get tedious after a while. Nothing to offer on visuals, but it's a decent game that can be played by anyone who has an interest in chess, there aren't any special combos or power ups, sorry to be the burden of bad news there.