It may look old, but it does pack a punch.

There aren't many games with the 8bit graphic in modern times that catch the eyes of the young generation. As a gamer for many years I've come to love stuff like this - the most notable game I've played of this type being the excellent Mutant Mudds.

However, my attention has come to the classic that is Retro City Rampage DX. Playing this game on a smaller console was a bit off-putting at first, I'd previously played the WiiWare version and it was brilliant. Let's see if the handheld edition can live up to that. 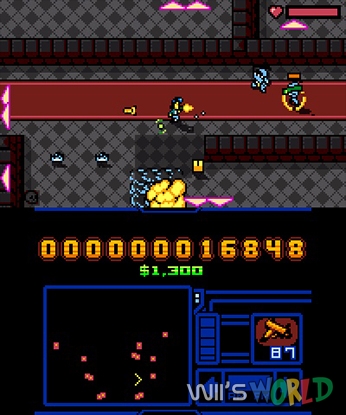 Retro City Rampage DX is a parody game where the gameplay and missions are similar to that of the first Grand Theft Auto. It's sort of related to the category of the Saint's Row series. However, unlike Saint's Row it doesn't concentrate solely on stupidity. Retro City Rampage parodies everything from games to movies, and as the cover photo for the game shows that is clearly a Back To The Future reference.

The story mode focuses on the protagonist nicely known as Player, if you haven't got the hint (and by God I hope you do because if not there is something seriously wrong) he is the character you play as.

Time progresses and after a few things happen (I'm not an ass, so no spoilers) Player ends up at the Doc's place (1.21 GIGAWATTS!) where he helps out by collecting items and dealing with foes in order to fix the time traveling situation he is in. 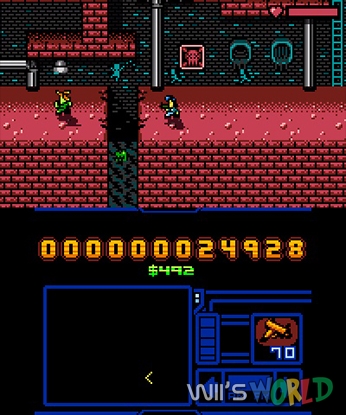 The experience is crammed full of wonderful references that firstly start off as video game references and gradually become more wide open. They come in all shapes and sizes. Metal Gear Solid is a notable one when you do the 'how to kill stuff' tutorial, whilst your surroundings will have things like Super Mario pipes on top of buildings and in the background of parks. Some of the references could have been delivered better though, some of the jokes involving them kind of run out of steam, so don't wait around for too many punchlines. The humor permeates the whole game - it's not just in the dialogue, it's also on billboards, names of clubs etc.

It is the perfect 8bit version of Grand Theft Auto, while obviously parodying it. Another thing I enjoy about this game is the music. It's one hell of an addictive soundtrack, it's chiptune brilliance. 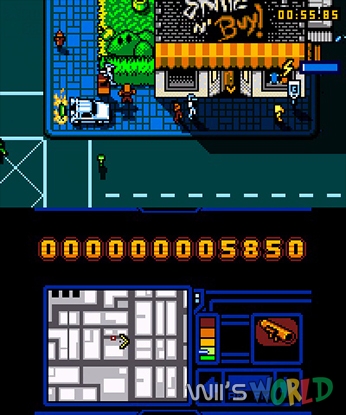 You can listen to the different genres of music the songs on the radio resemble, of these the most notable are heavy rock guitar solos. There are some rapid sounding tracks and we have groovy ones too, sweet sounding wonder that makes running over pixelated people rather blissful.

It plays exactly like any successful 80s video game does, with simple yet satisfying controls. Moving on foot and in a car both handle the same, the car movements don't use an acceleration button - the speed of the car depends on how far you move the analog stick. Fighting and shooting is the Y button, and choosing weapon is now easier on the 3DS thanks to the wonderful touch screen.

The game starts off as a mini tutorial and continues to introduce you to new things throughout the story. Set in an 80s theme, you will encounter characters and surroundings which are of that time. Some missions are easy while others require some thinking and patience. 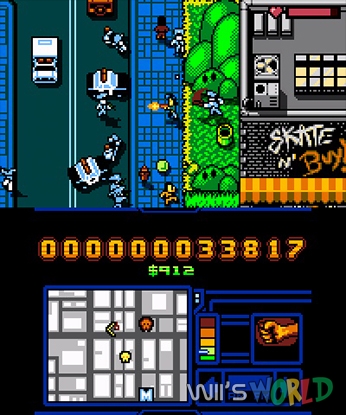 There is plenty of humor included in these missions too, one of my favorite missions involves a vehicle being possessed by ghosts and giving it dead bodies for it to feed on to become tame. These bodies come from an old people's home of course, and a person who works there throws the bodies from a window for you to catch, to then feed to the car.

There is some frustration when there is a lot of action going on during either a mission or free roam, when the gameplay lags for brief moments, but it is nice and smooth in most parts. The side missions and challenges are fun to play as well, the challenges mainly consists of destroying every living pixelated being on the map. As psychotic as this sounds, it's addictive.

Throughout the game you unlock different characters that you can play as in free roam, a notable one is Super Meat Boy from the very successful game with the same name. There are also different collectibles and power ups that you can use to make killing even easier. All these power ups are references, as everything is in this game, like the hover suit being the Tanooki suit from Super Mario Bros. 3.

Everything in this game is brilliant, ideal for people who are currently in their teens as well as the older gamers who grew up on NES titles. Retro City Rampage DX is a huge tribute spoof to everything old and wonderful about classic games and movies. It's addictive, it's funny and it's bright and beautiful.