Published by Sonic Powered, Developed by -

A take off that could have been better

A game about soaring through the skies on incredibly fast hoverboards sounds fun, doesn't it? Well, Skypeace here took it upon itself to take this concept and see what it could do with it. The result is a game that, while functional, could really benefit from some much needed variety and content.

Skypeace has you flying through the open skies as either a male or female character, both of whom play the exact same way. Your main objective is to avoid any and all obstacles that may block your path, gather as many coins as you can, and reach the end of the level before your health runs out. 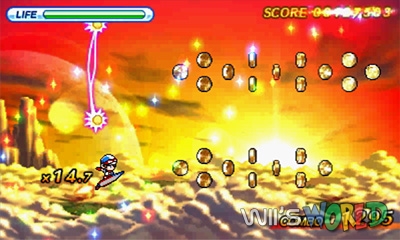 As far as pure gameplay goes, Skypeace isn't terribly bad. It controls well, and the sense of speed is decent. The problems arise from other different factors. Firstly, there are no extra modes at all in the game. You only have the option to speed through the levels and see how well your overall score is. Unless you're one of those players who are dedicated to getting the best score they can, this will probably cause you to grow bored of the game rather quickly.

The levels themselves bring up another issue: they all feel the same. There are 10 levels in total to pick from, and the only noticeable difference between them is the time of day. You might see one level ditch pyramids in favor of cities, but since most of the bottom half of the screen is covered in clouds, it doesn't feel like anything's changed. Obstacles are organized differently in each level, of course, and sometimes new obstacles are thrown into the mix, but at the end of the day, it gives off the impression that you're just constantly replaying the same level over and over again. Some more variety between the levels would have been nice.

As for Skypeace's presentation, it actually does a pretty good job in this department. Colors are vibrant, sprites are fluid, and effects are very nice. Skypeace's music is pretty decent as well, though perhaps not very memorable. The 3D effect is surprisingly well integrated in the game's opening, but not very noticeable in actual gameplay. Still, there's not really much to complain about in this department. 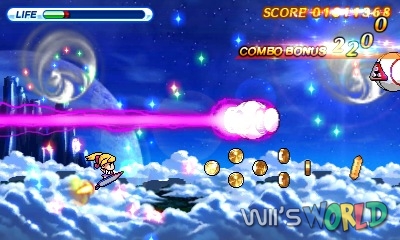 Skypeace also offers up 50 different achievements, all of which are obtained by performing specific actions during gameplay. For you achievement hunters out there, this may actually give the game more replay value and keep you engaged longer. If you don't care for achievements, however, there's unfortunately not much else to keep you coming back for more.

Perhaps I'm being too harsh on the game considering its low price point, but I still believe that Skypeace could've been and should've been a better game regardless. Functional gameplay can only get you so far if you don't have the content to back it up.