Quite often, it's common to find that games with earnest and addicting cores can find themselves tarnished by a plethora of exterior flaws. Some people are able to look past such problems if the central concept and mechanic framework holds tight, but others can easily be turned away thanks to poor attention to visual variety, audio quality, or what have you. In essence, these are matters that affect the game itself little in any objective rationality.

But we are not objective creatures, and a game that fails to deliver on artistic measure to match its conceptual promise rarely gains widespread acceptance. Such is likely the case here in Swords & Soldiers 3D, a recent e-shop port of a fairly popular mobile, PC, and PSN title that aims to fuse the tower defense genre with more traditional RTS research purchasing and resource gathering. Unlike the majority of tower defense games, however, the goal isn't so much to defend your castle as much as it is to push forward and take the enemy's. 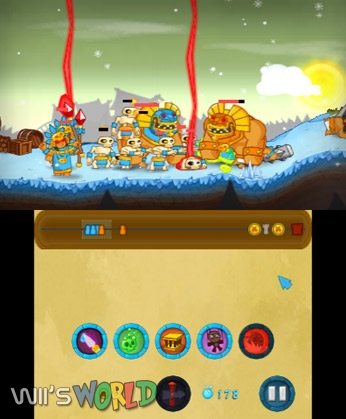 Thematically, this is a light-hearted game with an approachable style, considering its premise. After all, giving some of the most bloodthirsty armies in history cutesy faces and jubilant, child friendly personalities could be done in a rather tasteless manner, but Swords & Soldiers almost makes you forget the negative virtues of war as you fight over meat and gold with huge-bearded Vikings and the mystically powered Chinese.

And for the most part, Swords & Soldiers 3D plays rather well. There's an appreciable amount of strategic challenge that allows for some hectic battles with multiple layers of player involvement. You act as both commander and mage, simultaneously building and maintaining your front whilst taking time to cast spells and heal soldiers. In the worst-case scenarios, this juggling of duties can sulk on the mind-numbing side, as you'll likely lose track of what's going on where and you may even find that circumstances that called for a magic spell have changed drastically enough by the time you conjure them that they are no longer needed.

This exposes the unfortunate truth about the player's mage role, as the magic casting is barely adequate for how necessary a factor speed can be. If your men are falling fast, you may not be able to orient your hands fast enough to get your healing spell working its magic. The button/stylus combo (somewhat similar to the one found in Kid Icarus: Uprising) isn't an intuitive system and it creates a consistently devastating delay between need and input. It's likely that other platforms work better for this, since there's no way to provide a touch input for the top screen of the 3DS. 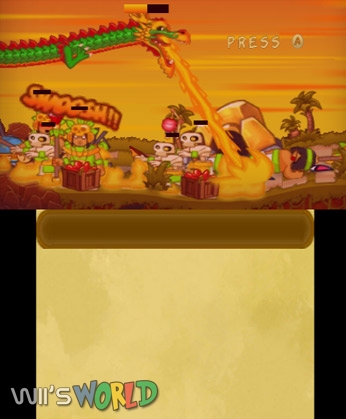 But the troubles don't end there. Despite the aforementioned dedication to style, Swords & Soldiers 3D often feels like a cheap product, with each character class only given one audio track apiece upon creation, meaning that creating multiple of the same Viking soldier at the same time creates a repetition of the same exact mindless roar audio file, and all the music lacking in distinction or even decent quality.

What little animation there is usually seems stiff and lifeless, and the overall impression is one of a free browser flash game, not a paid eShop title, sharing the space with the likes of Pushmo and Liberation Maiden. Of course, that doesn't mean that there isn't depth, longevity, or challenge. Swords & Soldiers 3D certainly has all three. It's just that it doesn't present itself as such, and it seems so keen on making me forget about the legitimate fun I might actually be having beneath the surface.

With all that in mind, $7.99 is likely a little too steep for most, especially considering that it's marginally cheaper on iOS and Android. Even with a healthy amount of content at 30 missions in total, this might not be a worthy expense unless you're truly a fan of what this game offers at its core. For the rest of you, your money might be better left saved for other experiences on what is quickly becoming a rich and varied marketplace.