Keep on Keepin' on

To some people, dungeon crawlers today aren't as good as the classics from the days of home computers and floppy disks. Games like Shadowgate, Wizardry, Dungeon Master, all pioneers at the time, and many people hold fond memories of them. The Keep is a new title from developer Cinemax, and attempts to capture the spirit of classic dungeon crawlers. Boasting sprawling dungeons, a high difficulty and even a permadeath mode for the truly hardcore, does it succeed in bringing back memories of days gone by, or does it fall into a trap at the first hurdle?

You play as an unnamed hero, sent to the titular Keep to stop the evil Lord Watrys from using children to mine addictive, corrupting crystals, with the power to imbue people with unimaginable power. You must use your wits to navigate trap-filled dungeons, abandoned mines, freeing the enslaved youngsters and eventually make your way to Watry's tower. Sounds simple, doesn't it? 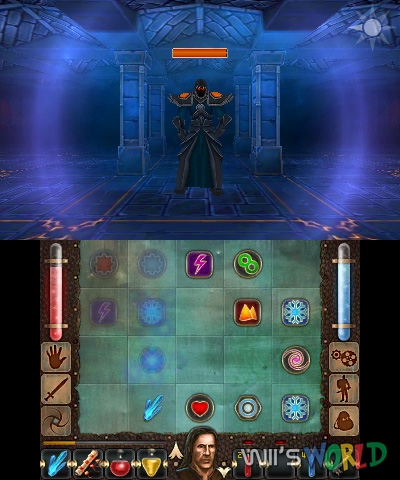 Well, the game certainly tries to capture the often brutal difficulty of the classic dungeon crawlers. The hero character looks, sounds and feels unprepared to battle against monsters and corrupt councils, and certainly he is. You will be killed many times, which to some may not be a bad thing. The game is the kind of title that puts you up against impossible odds, forcing you to think ahead and be strategic about your approach. It is very easy to be ganged up on by monsters, whaling into you relentlessly until you fall down dead.

One factor that often exacerbates the matter is that the enemies you encounter can't be walked past. It makes sense due to the grid based movement scheme, however if an enemy is on even the far edge of the square in front of you, you won't be able to move closer to them, meaning many melee attacks will miss. They will stagger around tauntingly close to you, only to be completely out of reach. This also presents another issue: being cornered. When backed up against a wall, enemies will crowd around you, blocking your exits, and forcing you to either take them out or accept your fate. This often forces you to lead enemies out into a corridor, fighting them one by one and hoping they don't kill you first. It feels slightly unfair, and I became rather frustrated after a few unfortunate encounters.

Another issue I had with melee combat was that enemies block frequently, and attacks miss far too often. In order to keep the combat flowing, enemies do not have a blocking animation. The blocking happens at random, and it can be incredibly frustrating to miss two attacks and then land one, only to have it blocked just because the game says so. Another slightly irritating element with the combat is that enemies have areas that can be hit to deal damage. However, with some enemies, it just isn't obvious where the hit points are. The models have no indicators, and you're forced to slash wildly in different ways hoping to hit the enemy. It gets old fast, and it wastes stamina. You'll end up wearing yourself out on one enemy and get killed by them when you're done. 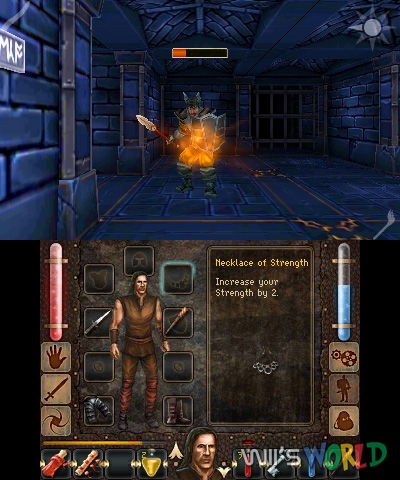 There is however, a way to circumvent this issue: You can craft spells with runes and crystals, and use magical attacks instead. I ended up using magic attacks the most, simply because they were more likely to hit, and they could be used from a distance. Crystals however, bigged-up as they are by the plot, are shockingly ineffective nine times out of ten. The added damage is barely worth raving over, and you'd often be better off not wasting them, and just using the regular spells.

You can set up collectible runes on the touch screen, in specific orders, and then swipe across them to cast an attack. This system actually works rather well, and swiping spells towards your foes is quite fun. The aiming mechanic is an issue however. If you see an enemy's health above their head, you are currently aimed at them. This seems fine, until you realise that magic attacks will phase through monsters in front of your target and only attack the targeted enemy. This is an issue that never really gets in the way until enemies begin spawning in minions of their own, when it can be incredibly frustrating wasting precious mana on underlings being spawned in.

There's a real sense of accomplishment in defeating enemies, mainly due to the fact that no enemy is a minor threat. Any and all creatures within the dungeons will drain your health fast, and even rats and spiders can completely wipe you out. Add to the fact that later into the game, enemies will begin regaining health, which can thankfully be canceled out if you attack fast enough, but if you're out of mana or stamina, you are forced to watch your foe regain the health you have been desperately chipping away. 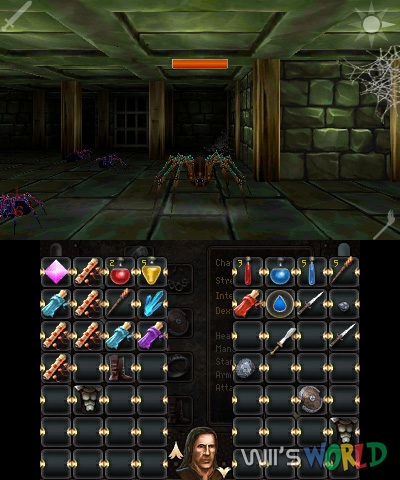 The level design is unfortunately rather cheap in places. Most of the game, I enjoyed working through dungeons, finding secrets (though not always well hidden) and solving puzzles. But occasionally the game will throw in a section that requires you to do something that can be quite clunky with a first person grid-based control scheme. A room filled with trapdoors opening and closing, making you time your moves to reach the other side. Holes in the wall that shoot energy balls at you, as the game locks you into a corridor as you desperately dodge the attacks side to side. These areas are thankfully few and far between, but they certainly take time to pass and they tend to do little more than aggravate me.

Movement itself isn't horrible, but it's dated. You can move back and forth and turn left and right. Holding down L allows you to strafe, and the D-Pad acts as a shortcut to different touch screen menus. Maneuvering is sadly stiff, and the game desperately needs a run button. When it comes to the occasional instances of backtracking, you do wish that you could move faster.

The Keep looks rather like an early PSP game, unfortunately. The dungeons all look the same, and you'll be forced to check the map to get around at some points. There are only three or four different visual styles to the dungeons, and as such the levels seem to drag on. It doesn't help that the levels themselves can take 20-40 minutes. The 3D isn't too bad, however, and some particle effects like dripping water and magic effects really pop out. 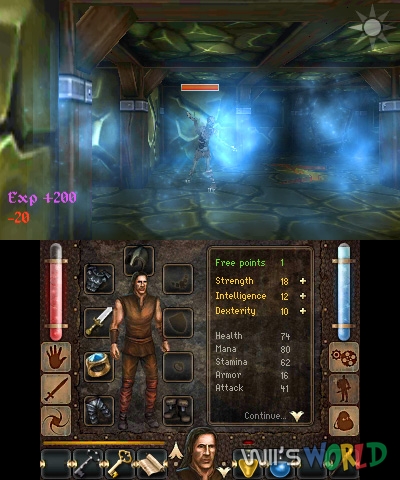 The sound effects aren't too bad, either. The game has a good amount of atmosphere, and the sounds of monsters shuffling in the darkness permeates through. Some sound effects (usually combat related) are rather 'stock' sounding, and the music is some of the most forgettable I've heard in a long while. I have no issues with an atmospheric score, but the game often has no music playing whatsoever, and it's sadly rather underwhelming. The voice acting isn't much better. The main character often sounds rather bored, and the children all sound identical. Watrys doesn't sound very intimidating, either. The plot itself is just not interesting. It gets rather confused about who the real villain is supposed to be, and what the morals are supposed to convey. The ending itself is incredibly disappointing. It feels rushed, and it makes the ending to some early NES games look deep in comparison. Honestly, it is rather a nitpick, as a game like this really doesn't need a plot. But it's rather underwhelming nevertheless to have such a dismal excuse for a story.

At the end of the day, you have to ask yourself if you're the kind of gamer who can appreciate the difficulty spikes, slightly archaic level design, frustrating combat and the simplistic gameplay. There is an audience for this kind of game, and they'll probably really enjoy themselves with The Keep. It's very reminiscent of the dungeon crawlers of old. Perhaps too much.

It lacks any real personality or identity of its own, and it's just far too difficult to enjoy at times. But I did have fun within the dungeons, and I'm glad that I experienced them. But half of the time I just wished the level would end, or the enemies would just leave. It isn't that The Keep is a 'bad' game by any means. It's just that it's an acquired taste. Sadly for me, these dungeons just didn't taste that sweet.