A reminder of your days playing web-browser games

Anyone that grew up with the Internet at their disposal can remember the days of clicking away on various Flash-game websites, always looking for the next great way to entertain oneself. Whether it was intentional or not, F K Digital and CIRCLE managed to come up with an 8-bit RPG that brings the look and feel of a Flash RPG straight to the 3DS.

The story of Witch & Hero follows -- you guessed it -- a witch and her hero. The story begins with a short tale of an evil monster named Medusa, who has been terrorizing the nearby villages. The witch and hero come into play when a chief offers them a bounty for stopping Medusa, which they accept, setting off on a quest for "justice" (really, it is a quest for riches). Upon reaching Medusa, the witch and hero are utterly defeated, and the witch turned to stone. The hero, dragging the petrified witch, makes an escape, and their journey begins anew. This time, it's personal. 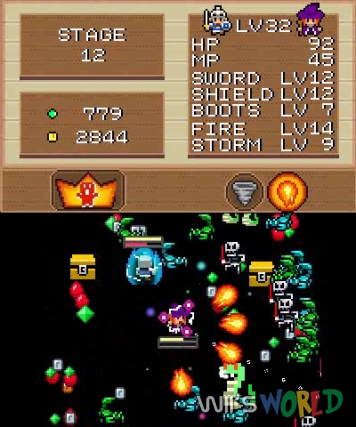 You get to take control of the game at this point, embarking on a journey back to Medusa in order to defeat her and break the curse on the witch. In between levels, you are given the option to view your stats, visit a shop, return to the title screen, and start a battle. The shop is a very straightforward place in which you can upgrade the stats of your witch or hero.

The gameplay itself is fairly straightforward: enemies move in from the edges of the screen to take out your witch. Maneuvering is relatively simple to execute, as you move the hero with the circle pad, and you attack enemies by bumping into them. Both the witch and the hero have their own life bars, and the game ends if the witch dies. Fortunately, if your hero falls, simply flailing the circle pad will revive him. Unfortunately, the hero's life is the most frustrating aspect of the game. Whenever you bump into an enemy, your hero and the enemy both take damage. Hitting a weak point on a monster (getting behind them, usually) maximizes damage dealt while minimizing damage taken, but there is still damage taken, and falling when a large wave of monsters are about to hit the witch can mean starting the level all over. Levels end when the boss monster (a large version of a regular monster) is defeated. Knowing this adds a layer of strategy to the game; in a pinch, it may be better to just take out the boss before the hordes reach your witch.

Speaking of the witch, after the first few levels you gain a new ability; you can gather the blood of fallen monsters to bring the witch back for a few moments. During that time, the witch can either cast a storm across the screen (it has a wide area, but low damage), or she can launch powerful fireballs at the monsters. This latter magic is much more powerful, but requires the L and R buttons to be properly aimed, which can get complicated when your focus becomes divided between the witch and the hero. 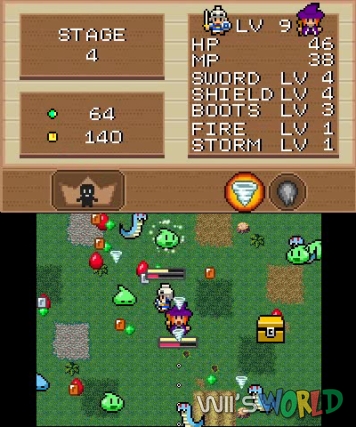 As the levels progress, the game gets much harder, making grinding almost a requirement to proceed. That said, the game provides a decent challenge. Thankfully, the art style and music are quite nostalgic of the 8-bit era of video gaming, and the music changes to more intense tunes when bosses arrive, making the game a good bit of fun to play. The best part about the game is that you can choose from your completed levels to play, meaning that if you only have a few minutes to play, you can roll back to a shorter level, and still successfully grind in the time allotted. Moreover, because of the simplicity of the graphics, music, and menus, the game is a breeze to pick up and play when you feel like you need a break between other games or activities.

While the gameplay can become frustrating at times, Witch & Hero is a wonderful and affordable distraction that is sure to entertain.