Published by Natsume, Developed by Agatsuma

The original Yumihara Kawase was a SNES platformer that, while lacking the production values of a Mario game, still had a lot of heart. Though the title was not commercially successful in Japan, it still generated a passionate group of fans. The game gained several sequels and a remake, all of which only came out in Japan... until now. Thanks to the fine folks at Natsume, and the wonders of digital distribution, we in the west have been granted 'Sayonara Umihara Kawase!' or Yumi's Odd Odyssey.

There is not much to say about the story. Supposedly, the game takes place during the bizarre daydreams of heroine Yumi, her friends and her little sister/younger self... yeah, the game is a little confusing on that point. The goal is simply to make it to the end of each stage while avoiding walking and giant sea life. 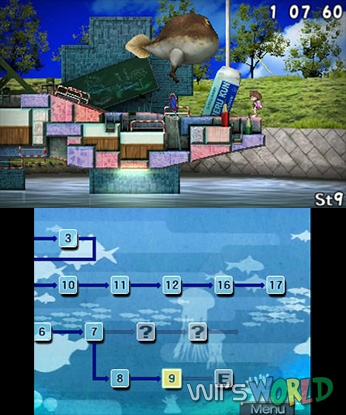 Thankfully, Yumi's best aspect is the gameplay itself. Initially, Yumi seems like an average 2D platform game but quickly establishes itself as something more. Yumi is equipped with a fishing rod and reel, which can hook on to nearly any surface. Yumi is not talented at jumping, but can extend or reel in the fishing line when attached. Unlike a real fishing rod though, Yumi's acts like a rubber band, a rope and a grappling hook at the same time. Players use the item to swing across gaps, stun and capture enemies and build up momentum to make enormous jumps.

Players should be warned though that Yumi's Odd Odyssey has a rather steep learning curve for those not familiar with these games. YOO uses a legitimate physics engine to make the line mechanics work and the controls are not as simple or easy as a Mario title. That being said, potential failures are never on the part of the game. If a player continues to practice without giving up in YOO, they will get better. In a way, this can be compared to titles like Dark Souls; victory is more satisfying when players know they are legitimately skilled and not just lucky.

Enemies are largely just moving stage hazards, though some may spit projectiles or move slightly faster. New elements add variety to the gameplay with additions like deadly spikes, moving conveyor belts and slippery ice to make things more difficult but not unfair. Completion oriented players may wish to also look for the hard to reach backpack items and secret exits. Boss fights can be incredibly difficult at times, but are still as rewarding as only old 2D titles and Dark Souls have matched. 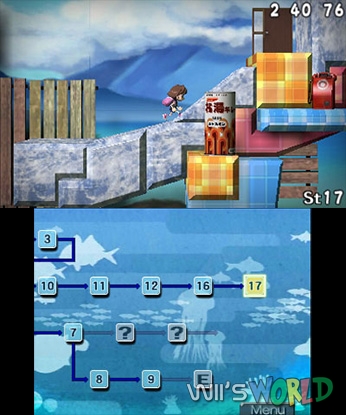 The graphics are decent but feel somewhat primitive. There's no real use of the system's 3D effects for gameplay, and the polygonal look is okay but does not really fit with the original tone. The Umihara Kawase series evoked a dreamlike state similar to Alice in Wonderland and the SNES version's low colors and muted hues better fit the series. The graphics are good and there are no real technical issues, so this is more of a personal preference.

YOO features a very appropriate soundtrack, with songs that vary from easy listening to Jazz. Sounds are fun, and there is no voice acting to speak of.

Yumi will likely last most platform fans quite some time, unless they are a longtime Umihara Kawase fan. In addition to players taking a while to master the game's mechanics, there are over fifty stages to go through. In addition, the game features three additional characters to unlock, new retro soundtrack tunes, hidden backpacks and competing for times on the online leaderboards. It will likely take even the most stalwart platform fan some time to do everything.

Yumi's Odd Odyssey is a great platform game that is not for the faint of heart. Admittedly, the game's price is quite steep for an eShop title, but it has the old-school mentality of 'one more try'. Players who stay with the title will likely gain a great sense of accomplishment, and we should simply be happy that this cult classic series was able to make a western debut. Welcome to America Yumi, let us hope you will not actually be saying 'Sayonara' to games just yet.