Of all the developers bringing software to the 3DS lineup, perhaps the one which has done the best job is Capcom. Ironically, they chose not to try the arduous task of trying to make a brand new game in time for the 3DS launch, instead simply porting a popular and existing title, with some added features of course. By simply improving upon the original Super Street Fighter IV, Capcom has made arguably the best title in the entire 3DS lineup with Super Street Fighter IV 3D edition.

Quite honestly, the graphics look amazing. The backgrounds, character animations, colors and textures are all largely intact, with virtually no slowdown period. The only exception is the stage backgrounds, but to be honest, when players are busy simply trying to keep themselves alive against an opponent, it's doubtful that anyone will care about a few cheering fans in the background. New to the 3DS version is a cinematic, over the shoulder view, meant to make the 3D effects stand out. Unfortunately, this view hinders the game more than it helps, but thankfully it isn't mandatory in any way. The 3D effects are fun, but like every other 3DS game, aren't used for any real gameplay improvements. 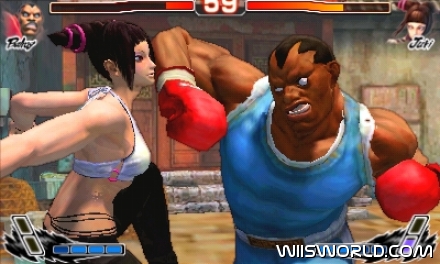 The gameplay of SSFIV largely remains totally intact from its console forebears, an astonishing feat and a good indication of what the 3DS is capable of even at this early point in its life cycle. Every fighter from the current console incarnations is included (though that doesn't include the upcoming Arcade version DLC), and even better, the alternate costumes which were DLC in the console versions are all included free of charge in the 3DS version.

The 3DS circle pad makes performing Hadoukens, Sonic Booms and Psycho Crushers very easy and comfortable, and players do have the option of using the 3DS digital pad if they prefer. The L button is used for the high punch attack and can be slightly awkward for those used to playing on consoles; other than that, things are relatively fluid and easy. For newcomers, a training and 'challenge' mode allow for lessons on moves and combos as well as just the ability to practice them; unfortunately, an option to see the combos in action would have helped, as the proper timing to perform them is not included in challenge mode.

Most of the standard fighting game modes are included with the game, including Arcade, Training, Versus and Online fighting modes, but the game also includes a multiplayer tag team mode and the new figurine battles. Using the 3DS Streetpass, players can engage in 'unseen' battles in which one player's figurine fighters fight others based on their stats. Luckily, Capcom seems to have anticipated that not everyone would be able to gain figurines and find other 3DS owners, as there is an option to gain additional figures with codes. Otherwise, it's fun, but with not as many 3DS owners as DS owners, the feature is pretty useless for the time being. 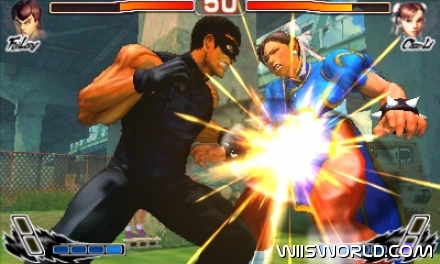 Capcom has also wisely added a feature for those unfamiliar with portable fighting games, or with fighting games in general. By using the 3DS touch screen, players can assign up to four Super and Ultra combos, and special moves if they so desire. This makes it far easier to pull off complicated moves, and gives the game easier accessibility to newbies. Thankfully, when playing versus matches, the option to play with or without this feature is always open, so 'pro' players can have matches without fear of cheap super moves being spammed quicker than they can keep up with.

Considering that this is Capcom's first 3DS game, what is especially great, and a good indication of Nintendo's new stance on online, is how well the multiplayer works. For the most part the online Wi-Fi play works great, and though there's a slight amount of lag, it's a huge step up from the days of the terrible Wi-Fi in Smash Bros. Brawl. While players can share a game online between several players, most will be interested in the online features. Every player can create their own online lobby, so finding someone who wants to have only one round matches, unlimited time, 2D play and pro mode controls takes mere seconds. Though there won't always be players available immediately to have matches with, the fact that SSFIV3D allows for play in every region of the world gives a greatly diverse group of world warriors to anyone who wants a challenge, as opposed to the mere 400,000 potential players in just the US. It's another wise decision by Capcom, and makes one wonder if later games will employ similar online features.

Overall, Super Street Fighter IV 3D edition is currently the best example of the 3DS' potential, with terrific graphics, great gameplay online and off, and added replay value with modes not even in the console versions. If you enjoy fighting games, it's a definite buy. If one isn't into fighting games, it is likely a better idea to wait until June for Zelda. Nonetheless, SSFIV3D remains the best game in the 3DS launch library.