This year's earliest One Piece video game offering, Romance Dawn, was a disaster. With a poorly integrated story, uninspiring gameplay, and a flawed battle system, there was little to redeem the game and probably damaged players' hopes of a good RPG-esque One Piece. Fortunately for us, the fourth installment in the Unlimited World series came westward, giving us a One Piece game worth spending some time with.

One Piece: Unlimited World RED, developed by Ganbarion, boasts new characters and a story brought to us by the ever sleep-deprived and hardworking One Piece creator Eiichiro Oda himself. We've got Pato, a raccoon / magical pen being who can draw objects into existence, and then we have the titular Red himself, who's provoking the Straw Hats into following after him for reasons they need to figure out over the course of the game. 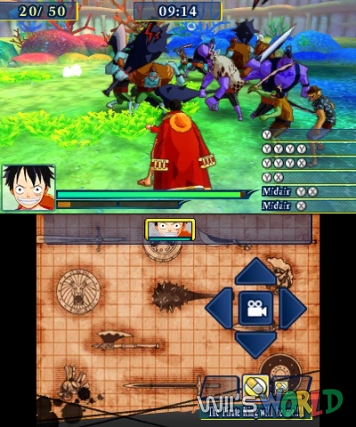 Sadly, the introduction of Red and his assistant Pato don't do much to prevent the game from largely being another "trip down memory lane" experience for the Straw Hats. Most of the game is structured around revisiting past places of significance to Luffy and co., so we're once again booting Wapol from Drum Kingdom or tackling the dragon from Punk Hazard. This method makes the story less compelling than it should be. It's not until the middle of the game that we really get the new story about Red and Pato instead of focusing on the "mystery intrigue" that sees us proving ourselves once again against the same old foes.

The story has a slow build-up, but the game can be forgiven since the combat system is Unlimited World RED's real shining point. We've got a variety of play styles to choose from, from Luffy, Sanji, or Zoro's powerhouse tactics to the more strategic and background fighting of Nami or Usopp. While we can say, based on strength, Luffy's more powerful than Usopp, each character is pretty well balanced with their own strengths and weaknesses. For example, Luffy's going to zip around the battlefield much faster than Robin is, and his strength will make him able to beat down enemies with more force than Usopp and his slingshot.

It's still fun, though, to try out the various different characters and find one that fights how you prefer. I never much cared for Franky, who moves slower to accommodate for the power of his cannon shots, or Robin, who also just seems to move so lethargically... or gracefully, however you want to look at it. On the other hand, I found I rather enjoyed Nami, who's not an in-your-face fighter like the main three boys, but whose Climatact can actually be fairly powerful if you use it right. 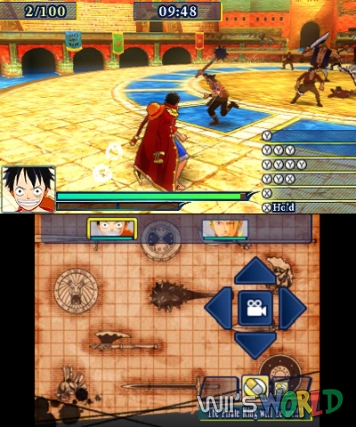 Each character has a specific set of combos they can execute, and if you achieve all of them within a battle, you'll get a bonus few seconds to cause increased damage to your opponents. You've also got a meter to fill over the course of battles that lets you use Strong Words or special combined attacks with your party members.

Also, interestingly enough, the player character is the only one who can sustain damage, so unlike traditional RPGs, you don't have to worry about your allies getting hurt. Party members can take however much damage and not actually lose health, and once the player character gets KO'd, you can switch to the next character you've got in your party.

Given the strength of Unlimited World RED's combat, and the fact that fighting as all these characters is the game's biggest selling point, I do find the Coliseum mode to be the main highlight for this game. Once you enter the Coliseum, you'll be able to unlock many series favorites, from Trafalgar Law to Crocodile. You'll automatically get to play as Law, since the game takes place roughly during the same time period as the latest manga released west. But to unlock the other characters, you'll have to fulfill certain gameplay requirements, from using a specific character so many times, increasing your rank, or just pulling off a set number of a particular move in combat. 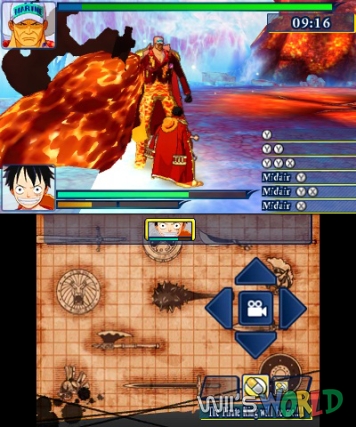 Fighting can get repetitive as a result, since you have to fight numerous battle royale or one-on-one fights to earn enough points to increase your rank. That means you'll need to invest some time in battling as more than just one character if you want to keep things interesting for yourself and to challenge your play style, otherwise it can become a pointless grind-fest to reach the next rank.

But, lest I forget, fighting isn't the only thing Unlimited World RED has going for it. There's a healthy amount of content for players to keep occupied with in the main story as well. Your side goal, aside from hunting down Red, is to rebuild Transtown. You'll be able to collect items through your travels and cash them in so you can build a pharmacy, restaurant, etc., and in exchange you can get stronger items like an upgraded fishing rod or bug catching net. You can also go on quests to increase your notoriety and fame as a pirate, earning new items as a result as well as gathering materials for new buildings. Many of these quests will have you put your fishing and bug catching skills to the test, so you'll definitely need to make sure you keep upgrading these items. There's enough in Unlimited World RED to keeps players occupied, though again, there's not terribly much variety. You're essentially on one fetch quest after another. 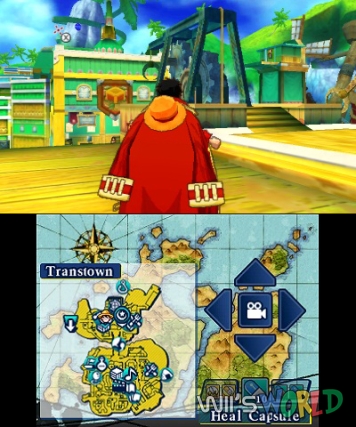 Overall, One Piece: Unlimited World RED is a fun game for One Piece fans to enjoy. The music is easy listening, the graphics are good for a 3DS game, and gameplay is for the most part solid. It does seem, though, like Unlimited World RED may be best enjoyed on a larger screen than even the 3DS XL. At times it felt like everything - Transtown in particular - was scrunched down so it could fit into such a small space. It felt a bit claustrophobic, but this likely boils down to the aforementioned irritating camera controls. Fortunately we've otherwise free movement, even being able to use Luffy's gum-gum abilities to stretch out and pull ourselves to far-off, or high-up locations, as well as float down to the ground as gently as a balloon.

So, if you've been waiting for a One Piece game that lets you play as any of your favorite characters in battle or wandering around town, look no further than Unlimited World RED.

RickyBamBam: One Piece fans, the 3DS game wait is over! Whether you are or aren't a fan of the One Piece franchise, this... read more